You are here: Home / Bing / New Yahoo Agreement with Microsoft Allows Mayer to Terminate Agreement At Will 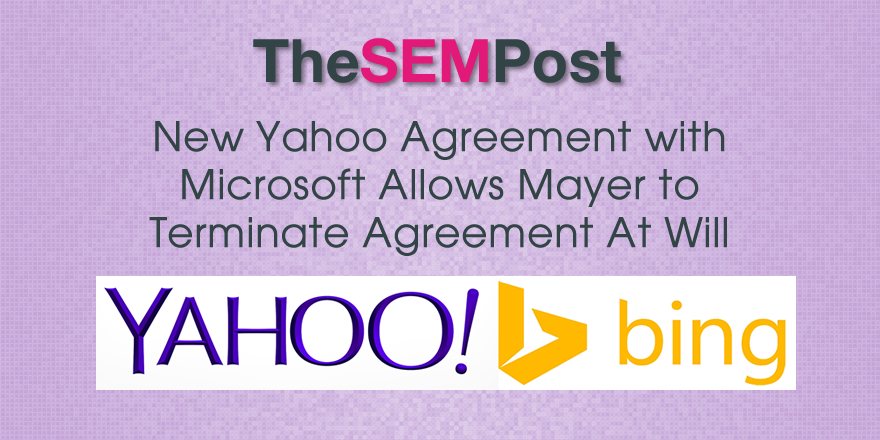 We have some more details about the search deal that Yahoo and Microsoft renegotiated, and it was clear that Yahoo’s CEO Marissa Mayer was in the driving seat on this one.  The document was filed with the SEC and is very eye opening, particularly with some of the changes that Mayer managed to push through in the renegotiation.

Yahoo can use Bing’s search results without running Bing’s ads alongside.  However, if they do this, Yahoo does not have to share any revenue from their own ads, but instead will pay Microsoft a serving fee for the results.

Previously under the Search Agreement, Yahoo had sales exclusivity for Yahoo’s and Microsoft’s premium advertisers. Pursuant to the Amendment, this sales exclusivity will terminate on July 1, 2015. Yahoo and Microsoft will develop a plan to transition premium advertisers for Microsoft’s paid search services to Microsoft commencing on July 1, 2015 and to be completed by January 31, 2016.

Big perhaps the most startling is a clause that allows wither company to terminate the agreement “at will” at any time after October 1st.  This is a huge change from the previous agreement that required Yahoo to prove performance thresholds were not being met in order to terminate.

It is no secret that Mayer wanted better terms for this agreement.  She has a strong background in search from her time at Google but this deal was negotiated prior to her hiring as CEO.

All eyes will definitely be on Mayer to see what direction she goes for the source of the search results and the advertisements they run.   It is known she would like to bring search back inhouse to Yahoo but it is unknown how far along they are with their search technology.

Google has released a new version of the Google quality rater guidelines, a year after the last … END_OF_DOCUMENT_TOKEN_TO_BE_REPLACED