You are here: Home / Google / Penguin Recoveries Have Been Rolled Out to Search Results 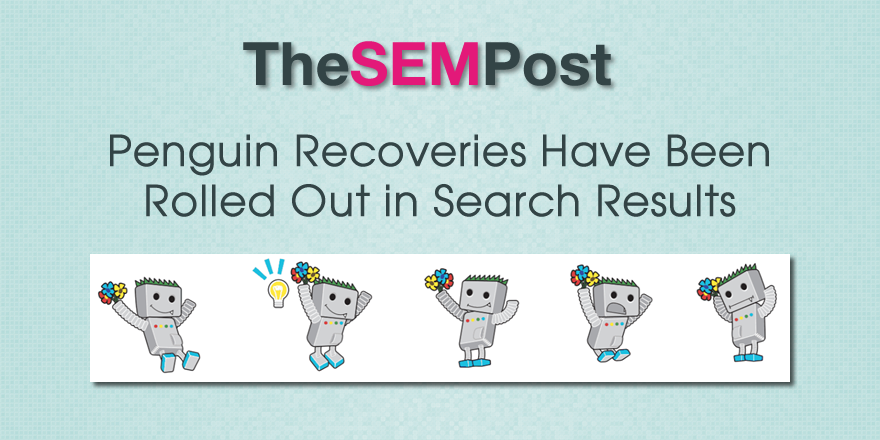 Waiting for a Penguin recovery?  Check your analytics, as those recoveries from previous Penguin launches should have all rolled out by now.

Last week, Gary Illyes from Google reported that the Penguin recoveries were rolling out, and would take a few more days to finish – a timeline which has now passed.

@atmoore81 it's happening as we speak. or tweet. it will take a few more days to finish that part

This is also confirmed by the many people who began posting screenshots on Twitter showing Penguin recoveries that have happened over the past few days.  When the first announcement came, many were not seeing any kind of recovery at all, which led to the speculation that the recoveries weren’t immediately rolling out, combined with the fact Google also needed to recrawl pages once it went live.

Here are some Google Analytics screenshots showing Penguin recoveries some have seen.

A tale of two Penguin 4s. One more extreme than the other, but search visibility changes for sure (both up & down). #seo pic.twitter.com/OhNMtRQFjh

Got a site that was hit by Penguin now at it’s highest organic traffic since (UK) @glenngabe @Marie_Haynes @rustybrick pic.twitter.com/odP1LyBUGe

Another smaller uplift from a Penguin hit site pic.twitter.com/bIsi4ofCcH

Oooh. This is nice. pic.twitter.com/EhR86p5O2e

It is also important to remember that SEO is in a completely different place from where it was 2 years ago when the last Penguin was released.  So many of the relevant ranking factors that boosted the site in the search results (outside of the spammy links, of course) might not be so relevant today.  So some sites that haven’t done any other SEO since the previous Penguin might discover their sites aren’t as relevant – or as high quality – as they may have been a few years ago.

Gabe’s tweet illustrates this where he shows recoveries from one site and notes while they all had large jumps, not all made page one recoveries.

Here are some rankings increases that occurred this past week for that site (+20, +21, +14, etc.) Not all page 1 now, but big jumps. #seo pic.twitter.com/lKIr0TebQK

Google has released a new version of the Google quality rater guidelines, a year after the last … END_OF_DOCUMENT_TOKEN_TO_BE_REPLACED