You are here: Home / Social Media / Photographer Suing Those Who Retweeted and Liked Photo in Copyright Infringement Case 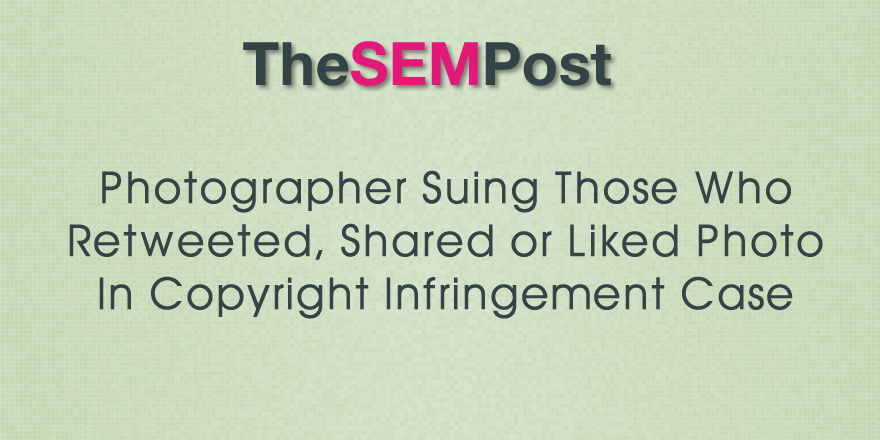 How often do we see an image on Twitter or Facebook, think it is an amazing image and share it without even thinking about it.  Well, if this copyright infringement case succeeds, it could have a huge implication on anyone who retweets or shares an image, even if they weren’t the ones who posted it originally.

Photographer Dennis Flaherty is suing Big Red Soda for using one of his images in an advertising campaign.  While this isn’t too unusual, as people steal images online all the time, it was being used as part of a marketing campaign without permission.

But Flaherty isn’t just suing Big Red Soda for using the image.  He is also suing those who merely retweeted it as well.

Plaintiff also claims that Defendants induced copyright infringement by distributing the photograph to third parties, that is, social media users who retweeted, pinned or liked the original social media post containing the infringing photograph. Plaintiff claims that, as such, they “stood in the shoes of the Plaintiff and licensed the image to Twitter,” citing Twitter’s Terms of Service which provide that by submitting content, users provide Twitter with a royalty-free license, thus allowing the social media site to make one’s tweets “available to the rest of the world and let others do the same.” Plaintiff is seeking actual, or, alternatively, statutory damages, for contributory infringement as well.

When someone retweets or shares a company’s marketing image, the assumption is that the company would have the rights to any images used.  But Flaherty believes those third parties should be liable.  From the case:

On information and belief, the Shared Work has been “re-tweeted”, “shared”, etc. by at least one third party resulting in direct infringement by that third party.

As the 1709 Blog points out, Big Red also placed their own trademark on the image, so it would be very hard to prove intention to infringe by random social media users, as they would have no way to know that Big Red stole the image they claim copyright on.

Consider the case of Getty.  While they are known to go after companies who use their images without buying the rights, but even they have not gone after anyone who has retweeted or otherwise shared an image on social media when used by another company without permission.

While it is highly unlikely that social media users who shared the image will be liable, sometimes you can’t predict what happens in the courts.

We finally have the first Google Quality Rater Guidelines update of 2022, and like usual, it is … END_OF_DOCUMENT_TOKEN_TO_BE_REPLACED