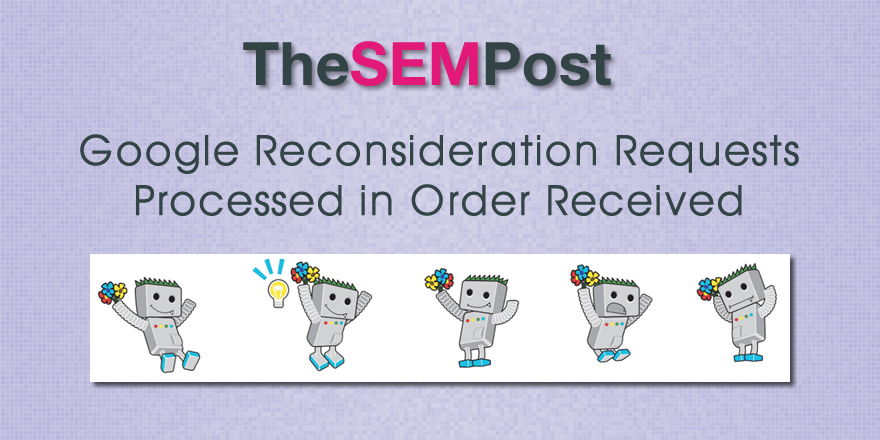 At SMX West earlier this month, Juan Felipe Rincón from the Manual Actions team at Google said that reconsideration requests are processed based on the order in which they are received.  So they are first come, first served.

That means it also might be tempting for site owners to submit their reconsideration request while they are still in the midst of cleaning up the hacked content and patching the exploit that caused the hack.  However, this could backfire if the request is fully processed before the site is completely clean, which could be the case for more complicated hacks, or ones that are hit repeatedly due to the exploit not being fixed or patched.

In these cases, it will have to go to a reviewer who is familiar with both of the languages.  When one of the languages is English, it shouldn’t be a problem to process nearly as quickly, but in cases where they are two less common languages used, it can definitely delay it.

For the most part, it seems that most reconsideration requests are processed in 3-7 days, although this also varies based on how many sites are submitting them at any time.  And we have also seen longer delays when there are a large number of hacked sites, that were hacked due to an exploit in a well known CMS or plugin, all being cleaned up with reconsideration requests submitted.

Google has released a new version of the Google quality rater guidelines, a year after the last … END_OF_DOCUMENT_TOKEN_TO_BE_REPLACED