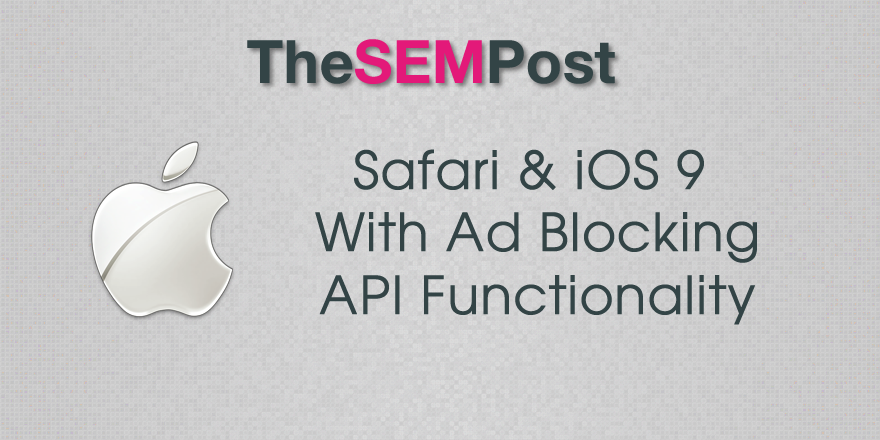 One of the surprises about iOS 9 is the addition of ad blocking functionality.

Many are viewing this as a shot directly at Google, as this new functionality could have a serious impact on their mobile ad revenue.

The official name is “Content Blocking Safari Extensions”, which is described as giving developers the ability to grant “your extensions a fast and efficient way to block cookies, images, resources, pop-ups, and other content.”  While this could be used to block things such as newsletter signups, it is much more likely this is targeting various types of ads, such as image ads, interstitials and pop up advertising.   And blocking tracking cookies means that Google, along with other ad networks, will have a much more difficult time targeting advertising effectively.

Apple hasn’t billed it as an ad blocking extension, however the details seem to imply that is precisely what it is used for.

Adblock Plus was surprised by the news of this new functionality, and whether it is good news or bad news for both their own ad blocking software and for users in general.

In short, either this new API will improve Adblock Plus performance on Safari or it will force us to rely upon an inferior blocking format that would essentially kill adblocking on Safari.

With this new mechanism, we’d need to convert Adblock Plus filter lists to a block list like the one above. However, most of our filters aren’t as simple as the example above. So, we are nervously awaiting how powerful their block lists will be, most importantly when it comes to matching the document domain and request type, as well as regular expression matching of URLs and recursive exception rules.

Their concerns could mean the end of Adblock being workable with Safari.

From a user perspective, this is a good move to give people more control over the advertising they see.  But for marketers, this could have a huge impact on their ability to reach iOS users, particularly if this becomes widespread or by default.

There is likely no ability to have a master whitelist for this, at least not how it is set up for iOS 9 now.  Some of the larger ad networks have deals that allows their ads to be whitelisted in programs like Adblock Plus, but this wouldn’t apply to iOS 9 unless Adblock Plus can manage to make Apple’s version work with their own, and manage to get the market share on iOS 9 as well.

However, it should be noted that the new iOS API isn’t working currently, and Apple hasn’t released the full documentation yet for developers to test it and discover how far the ad blocking functionality goes.  Apple would also need to approve the apps with the content blockers before they could be included in the App Store.

We finally have the first Google Quality Rater Guidelines update of 2022, and like usual, it is … END_OF_DOCUMENT_TOKEN_TO_BE_REPLACED