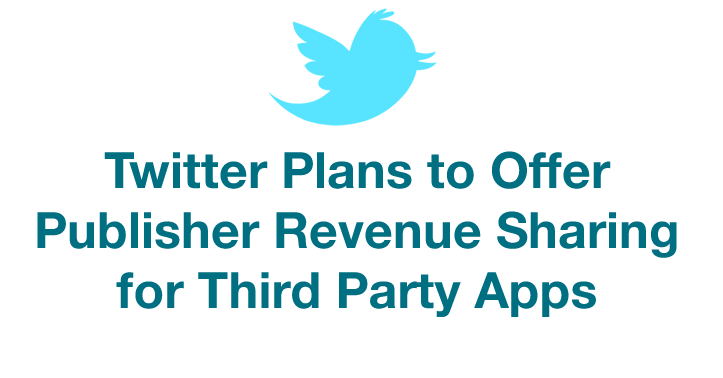 Twitter wants to be able to place their ads within the Twitter news feed that users who are using other platforms to view tweets, and Twitter would then share the ad revenue with each of those platform’s publishers, whether it be an app or another kind of platform.

At CES last week, Twitter referenced both the ESPN SportsCenter app as well as Flipboard. Twitter was previously testing running ads through Flipboard but it was unclear what sort of monetization plan the two parties agreed to before the Twitter ads began running, or if they plan to continue it under the new publisher revenue sharing plan.

Sometimes third party apps can be a headache for advertisers who want to avoid apps that might result in accidental clicks or incited clicks, since publishers get a share of the revenue.  It is unclear if Twitter plans to allow advertisers to opt-out of their ads being displayed through third party apps.

One of the main problems Twitter has is that many of their users never actually see any Twitter ads. Many of the apps and platforms that people use to display tweets do not display the ads as well, meaning Twitter is losing out on a lot of potential revenue and advertisers are missing out on the potential ad views and customers.  And it’s a pretty significant amount – in August 2014 it was reported that almost 40% of people who use Twitter never use either the Twitter website or an official Twitter app.

With Twitter sharing revenue with publishers, it could potentially increase ad views by up to 40%, and that is a pretty significant amount for a platform that is still trying to figure out how best to make money.

Of course, this also opens up the window for publishers who might post their Twitter feed on their website.  Could those Twitter users see a revenue share from simply displaying their recent tweets with a sponsored tweet or two in there?  It definitely opens up the realm of possibility for publishers looking for a revenue source outside of Google AdSense.

There is no word when Twitter might launch the new publisher revenue sharing program, but it seems to be well into the implementation stage, since ads were running through Flipboard last year.

Google has released a new version of the Google quality rater guidelines, a year after the last … END_OF_DOCUMENT_TOKEN_TO_BE_REPLACED