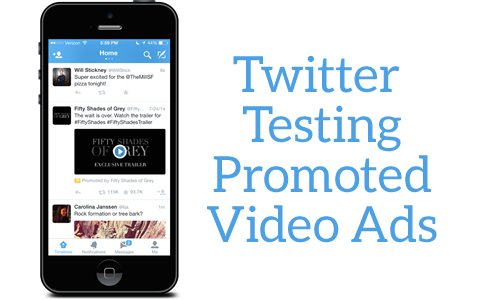 Twitter began testing native videos earlier this year, incorporating feedback from both brands and users.  While the initial videos were short 6-second Vine videos, more recent clips appear to be much longer duration in length, such as the 2:24 video showing the Fifty Shades of Grey trailer, which was the first widespread notice of the new Promoted Video ads.  Tony Hawk is another personality testing videos

The video ads appear with a regular 140 character tweet above it, with the video fully displayed below, even when it is appearing in a user’s timeline.  They are marked with the yellow arrow with “Promoted by _____” displaying underneath the video.

The ads are based on a pay per view and an advertiser will only be charged when a Twitter user clicks the video to view it.  Unfortunately, users cannot see how long the video is prior to clicking on the ad, meaning some users might not stick around if the video is longer than expected.

Non-paid video uploads will also be made available to more accounts as they expand it to select content publishers and verified users.  “The overall goal is to bring more video into our users’ timelines to create a richer and more engaging Twitter,” says David Regan, Senior Product Manager, TV & Video at Twitter.  “Video is an incredible storytelling medium and we’re thrilled to be giving brands, publishers and a subset of verified users the ability to share organic and Promoted Video on Twitter. ”

Fortunately for users, none of the videos appear to auto-play currently, however Twitter could eventually follow Facebook’s lead with their auto-playing video ads.

Twitter also included an image of how interaction with a video ad occurs.

Google has released a brand new version of the Quality Rater Guidelines, the third one this year.  … END_OF_DOCUMENT_TOKEN_TO_BE_REPLACED