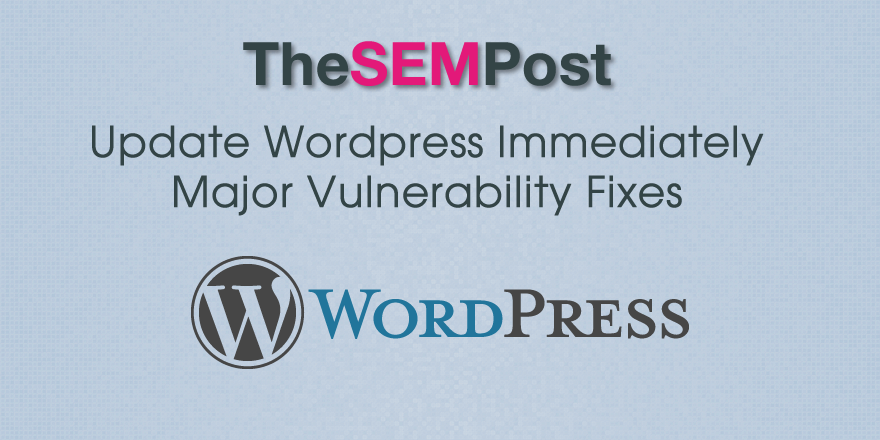 If you haven’t already updated WordPress with yesterday’s update, you will want to update immediately.  It fixes several vulnerabilities, including critical ones that are out in the wild.

Shortly before the update was released, Sucuri released information regarding a major exploit they were seeing across many WordPress sites that resulted in many WordPress sites infected with malware through javascript, in what they called a “admedia iframe injection”.  Sucuri noticed a huge increase in the number of sites infected over the weekend.

To check if your site is infected, look in .js files for anything that looks unusual appended to the bottom of the file.

They also made a note that it is the source of constant reinfections because this particular attack can hit all sites on the server, meaning all WordPress installations would need updating and cleaned up if any signs of the attack were found, otherwise it could constantly reinfect sites.

The malware tries to infect all accessible .js files. This means that if you host several domains on the same hosting account all of them will be infected via a concept known as cross-site contamination. It’s not enough to clean just one site (e.g. the one you care about) or all but one (e.g. you don’t care about a test or backup site) in such situations – an abandoned site will be the source of the reinfection. In other words, you either need to isolate every sites or clean/update/protect all of them at the same time!

It is believed that the latest update prevents this attack, although WordPress isn’t as detailed in their bug related fixes in update notes recently.

Wordfence also wrote about a meta attack they were seeing and created a video to show how the attack was done.

WordPress released an update yesterday, billed as a security release, and encouraged all sites to update immediately.  While many sites have autoupdated yesterday, you will need to manually update any sites that did not.

Update Feb 5, 2016: It appears that ransomware is now being delivered to visitors of compromised sites.

Google has released a new version of the Google quality rater guidelines, a year after the last … END_OF_DOCUMENT_TOKEN_TO_BE_REPLACED