You are here: Home / Google / Use Caution When Switching Between www & Non-www Preferred Domains 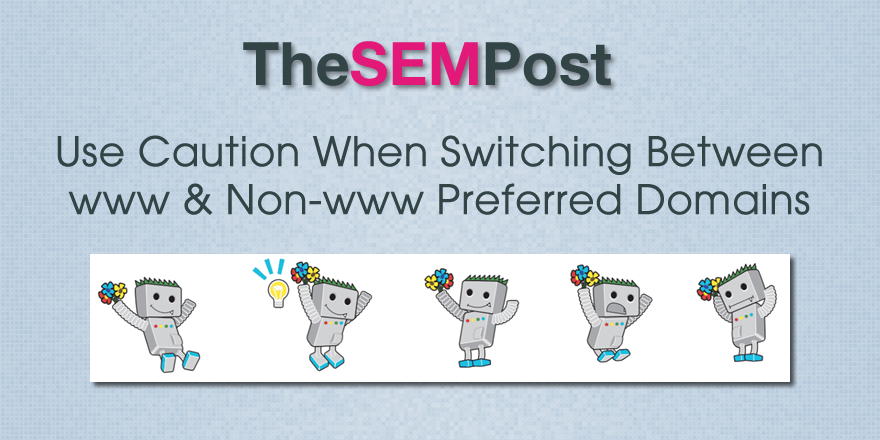 Usually when a site owner launches a website they pick and choose whether they want Google to index the www or the non-www version of the domain name, tell Google their preferred domain and then submit a sitemap or use fetch and submit for that variation.  Sometimes when a site owner discovers that a site is being indexed across both versions, they pick one or the other – usually the one with the most pages indexed – and set the preferred domain then.

But what about a site that has existed for for over a decade on one variation and the company decides to then make the switch?  Would rankings or visibility suffer as a result?

In general, you wouldn’t see a big change there if you switch from www to non-www, that’s something that we can handle fairly well.

You’d still need to kind of see this as a kind of site migration, so I would definitely go through the migration tips we have in the help center, with regards to setting up redirects properly, the canonicals, hreflang, all of that to make sure that’s set up between the different versions.

And also I would double check to make sure you have them separately in Search Console as well.

And finally, if you are doing this change and you are still on http, then maybe it makes sense to say well we’ll take this moment where we have to do a migration anyway and move to https.  So kind of taking the next step already instead of kind of leaving that for the next year to kind of run through.

Of course, from a technical standpoint, many SEOs would probably be reluctant to change the preferred domain that has been set for such a long duration.  Despite Google confirming 301 redirects no longer loses PageRank, there are other concerns such as the added load time associated with redirects, especially for sites that might already be struggling with page speed issues.

And of course the ranking lag is a real concern.  Generally we see about 2-3 weeks of ranking fluctuations while Google indexes the site on the newly preferred version of the domain and matches them up with the old version of the page to transfer the ranking signals.  And there are definitely times of the calendar year, such as the holiday shopping season, where undertaking this kind of change might not be the best idea.

Google has released a new version of the Google quality rater guidelines, a year after the last … END_OF_DOCUMENT_TOKEN_TO_BE_REPLACED