You are here: Home / Google / Using Nofollow on Navigation for Crawl Budget Reasons 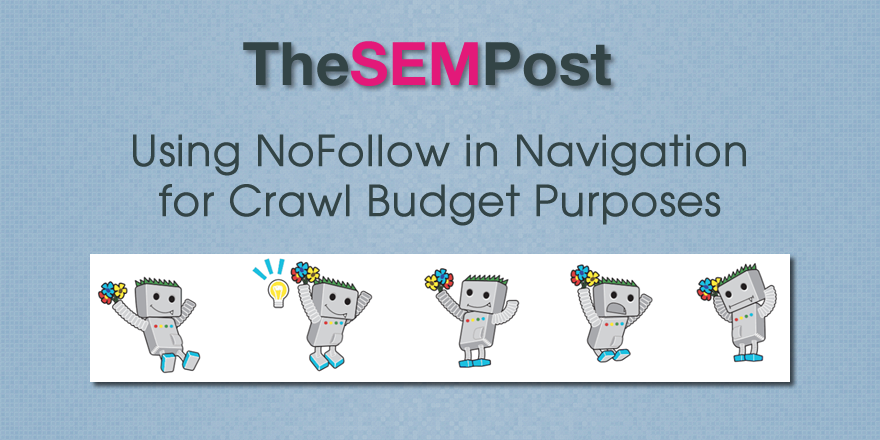 Sometimes SEOs use nofollow for crawl budget reasons, particularly for sites that are very large in size or that have a structure that doesn’t tend to be crawled as optimally as it could be.   So SEOs use nofollow to prevent Google from following certain links during the regular crawl, in order to direct Googlebot to crawl the more important pages and sections of a site.

One common target of nofollow for crawl budget tactics is the navigation menu.  But how big does a navigation need to be before there is a definite benefit to using nofollow on the links for a site’s crawl budget?  Turns out it is a lot larger than many would think.

The question came up in the last Google webmaster hangout, whether nofollow should be used on a navigation, particularly a large one, especially since this goes against Google’s recommendation that webmasters not nofollow internal links on their site.

I usually wouldn’t worry too much about that, that’s something where we can recognize the navigation fairly easily and we can still crawl the site normally kind of recognizing the structure in the website as well.  So unless your navigation has thousands of links in there, then that’s something I wouldn’t really worry about.  If it does have thousands of links in there, that’s probably a usability issue anyway.

But if you are looking at something like hundreds of links, something around that order of magnitude, that’s something we should be able to deal with.  That’s not something where you’d need to artificially tweak the navigation in order to make it disappear for Googlebot.

I don’t think this will stop those sites who are overly concerned about crawl budget to stop nofollow some navigation for that reason.  But as more site owners become aware of crawl budget and the possible need for using nofollow to steer Googlebot in specific directions on their sites, this should alleviate some to know that its use for navigation specifically is not required until navigation gets into the realm of thousands of links.

We finally have the first Google Quality Rater Guidelines update of 2022, and like usual, it is … END_OF_DOCUMENT_TOKEN_TO_BE_REPLACED