You are here: Home / Google / When Switching to HTTPS, Google Recrawls Faster to Process Move 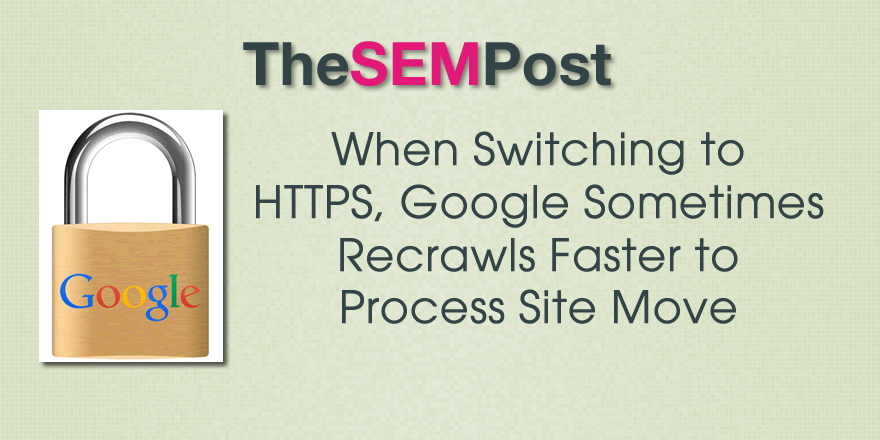 John Mueller recently posted a Q&A for moving a site from HTTP to HTTPS.  He has answered several questions readers had, and one of them was noteworthy for those who are making the switch to a secure site.

When Google recognizes that a site is switching to HTTPS, Google will sometimes recrawl the site faster than usual in order to process the move faster.  Others have noticed that it sometimes seems Google is recrawling an entire site quickly, so this confirms what people have seen with Googlebot immediately following a site move.

When we notice a move like this, we’ll sometimes try to recrawl a bit faster than normal so that it can be processed quicker. It should settle back down & if it’s too much, use the crawl-rate limit in Search Console.

John does mention that you can utilize the crawl delay feature for Googlebot if they are hitting the site harder than you think the server can handle.  While Google will automatically adjust their crawl rate if Googlebot sees it is causing issues, but you can change the crawl speed in settings under the domain in question right in Google Search Console.  Google doesn’t use the crawl delay directive that you add directly to robots.txt, although some other bots will follow that directive.  Don’t forget that you need to add the HTTPS version of the domain in Google Search Console and change it there.

Mueller’s response was to someone who changed their crawl rate to high when they made the HTTPS move, so you could potentially have Googlebot recrawl even faster by changing the crawl rate from default to high, provided you know your server can handle it, or you watch it very closely and switch it if your server becomes slow to respond.

This is good news that Google will sometimes recrawl a site faster during these types of moves, as the recrawling and reindexing of a site is why some webmasters aren’t making the move to HTTPS.  But Google has confirmed that you don’t need to move an entire website at once, you can move a site in sections or even page by page.

Google has released a brand-new Google quality rater guidelines, coming close to a year after the … END_OF_DOCUMENT_TOKEN_TO_BE_REPLACED