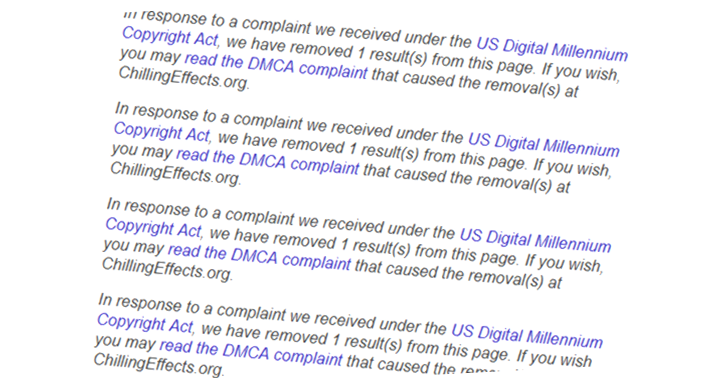 Ever wonder just how many URLs Google receives each year in DMCA complaints?  Torrent Freak has analyzed Google’s weekly transparency reports for 2014 and discovered that copyright holders and others have submitted over 345 million URLs to the search engine for removal last year.

That is an average of over 6 million URLs per week, the vast majority which are removed within hours of the removal requests being submitted to Google, which is believed to be the fastest turnaround by any search engine.

Torrent Freak also discovered which company filed the most URL removal requests.  They also determined that BPI, a UK group that represents the UK music industry, requested the most URLs removed – over 60 million of them in 2014.

Three websites that were hit with the removal requests hardest with more than 5 million URL removal requests each – 4shared.com, rapidgator.net and uploaded.net.  These sites were also heavily impacted by the pirate algorithm, which resulted in sites that are frequently cited in DMCA’s for URLs to remove being pushed down in the Google search results.

Google has released a new version of the Google quality rater guidelines, a year after the last … END_OF_DOCUMENT_TOKEN_TO_BE_REPLACED