You are here: Home / Bing / 4 Steps to Optimize the Hidden Keywords That Are Killing Your PPC Budget 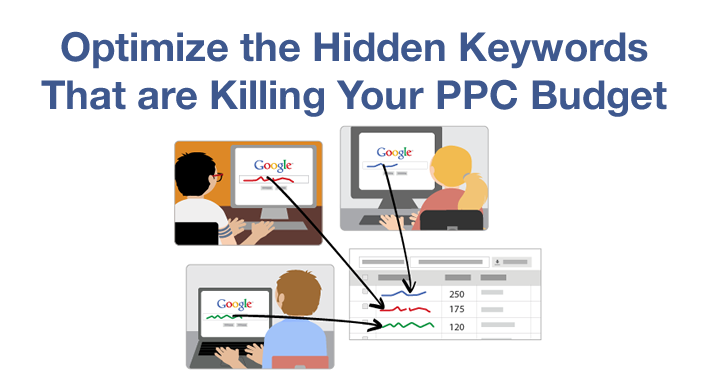 One of the most common and powerful optimizations in PPC is that of keyword bid management. Whether you perform these optimizations manually or through an automated rule or platform, the continued adjustment to keyword bids is one of the building blocks of your account. In conducting these changes, you are likely pausing off keywords as they fail to perform within your designated targets, which is often advisable.

The major component that is so commonly overlooked, however, is the long term success (or more significantly, failure) of your keywords, and the immediate impact that can be had by pulling these keywords from the picture altogether. But one can’t just begin pausing off keywords because they haven’t done terribly well over the past month or two. There needs to be a system and in the steps below, you’ll be able to perfect the art of these subtle, yet powerful optimizations.

To conduct “regular” bid changes, we typically choose a meaningful time frame, such as the past 30 days, past 14 days, or past 7 days. While some choose to use even smaller periods of time, it’s common practice to allow for a bit more data. When making bid changes on a daily basis, it’s likely that you’re not getting the full picture. Your keywords may not have substantial volume associated with the new bid due to a small time period, and when an account has any type of lagging conversion, this data becomes potentially flawed.

In the event of a weekly bid change, one commonly takes the keyword data from the past seven days, reviews their priority metrics and makes incremental bid, per keyword, to better reach their goals. An example might be reviewing keywords for costs-per-lead that were too high, and reducing bids because of it. The secondary might be an average position metric, such as ensuring that keywords don’t slip below an average position of 4.5.

There have been countless articles written on the art of manual and automated bid changes, including using a CPA Threshold for guidance.

Simple, right? Right. But this kind of regular bid changing can overlook those keywords that have been flying under your threshold radar and subtly limiting your budgets and thus, performance.

While regular bid changes are intended to identify optimization opportunities, there is a long-term analysis that can assist in improved budget utilization that may be slipping through the cracks.

If you’re anything like me, you read blog posts with a degree of caution. It can’t always be assumed that every strategy or tactic comes from the same starting point. Before we jump in, let’s establish a couple of assumptions about your account:

In this analysis, assuming consistent tracking over the past period,we’re going to examine keywords that have slowly been siphoning off budget, without any strong return. The example we’ll use is for a series of campaigns that have the status of “Limited by Budget.”

Filter keywords by campaigns that are dubbed “Limited by Budget” 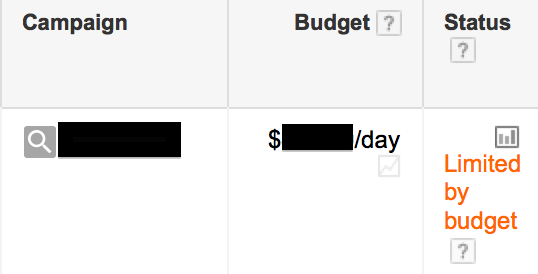 Pull your keyword report for the desired period of time. Now, this is intended to be a substantial period of time. Depending on the likelihood that your data experiences some major seasonal swings or underwent a period of major change, a simple place to begin is the past 365 days.

By pulling a report for the past 1 year, you’ll be able to see keywords that have spent little by little by little but have never generated a conversion. While they may never spend over the CPL threshold within your regular bid change window (such as a 7 day period), they are contributing to the strain on your budget, but with no evidence of previous success.

Let’s give the data a look: 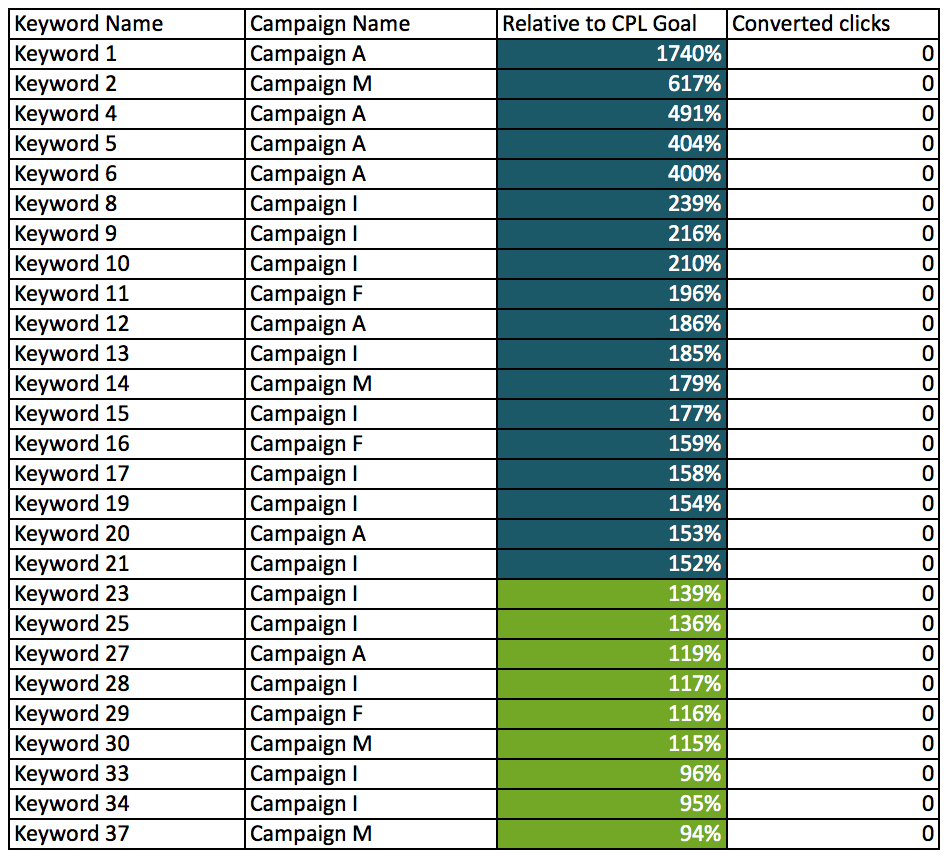 In this table, we can see

The relative CPL performance ( Cost ÷ Cost-per-conversion Goal ) gives a ratio of what the keyword has spent compared to the goal CPL for this. What I can clearly see is that there are a few keywords that have clearly spent beyond the acceptable level, and even though they’ve stayed under the radar month to month, they’re doing damage.

I know it hurts to quit on a keyword, but when the data speaks, it speaks with authority. In this scenario, I’m wasting precious budget on these terms that just never, no matter how long I’ve let them run, result in a conversion. These keywords are hereby paused.

There are 2 major follow-ups to put into place for this kind of keyword management:

So many of us spend day after day in our PPC accounts and we consistently perform our routine tasks. But as we’ve discovered today, it can be easy to miss the forest for the trees. Although some keywords may never perform that badly, the fact that they are consistently eating up just a little bit of budget each day means that they are hindering the success of other keywords and limiting the reach of that specific campaign. By regularly reviewing your keywords in an extended time frame, you can easily identify the culprits, remove them, and get back to work.

Carrie is an account manager at Hanapin Marketing, where she's spent thousands of hours specializing in all things PPC. As an active contributor to PPC Hero and Hanapin Marketing's webinar series, Carrie pursues any excuse to stay on the cusp of innovative PPC.

Her blog posts combine a sense of humor with a thorough knowledge of the successes, pitfalls, and opportunities encountered by her varying clients.

We finally have the first Google Quality Rater Guidelines update of 2022, and like usual, it is … END_OF_DOCUMENT_TOKEN_TO_BE_REPLACED