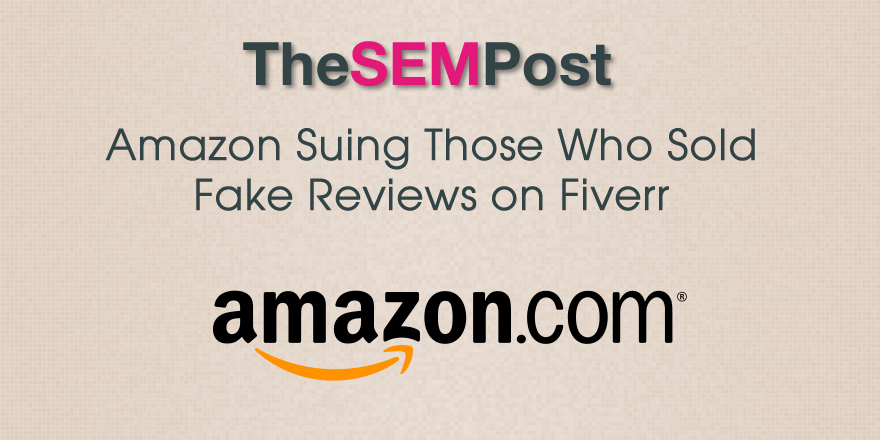 Amazon is hoping to make fake reviews on Amazon a bit harder by suing over 1000 people who were selling fake Amazon reviews via Fiverr.

In April this year, Amazon sued multiple website owners who sold reviews via “buy Amazon reviews” type websites, successfully shutting most of them down.   Now it is targeting sellers who have moved to alternative websites to sell their fake reviews, this time specifically targeting sellers on Fiverr.com.

Only a few individuals who used Fiverr to solicit jobs are used as example in the suit directly, but an attached “Exhibit A” offers a lists containing 1,114 Fiverr users. They’re called out by their Fiverr usernames only, which indicates that Amazon may not have their complete personal information. The lawsuit would be a first step at gaining that info from Fiverr’s logs.

Amazon is asking the court to order the individuals to stop posting jobs offering the sale of Amazon reviews, and provide information about their client list, including who paid them and which reviews they wrote. It also indicates that there could be monetary damages for these Fiverr users, as Amazon asks the court to make the defendants pay the court costs, attorney’s fees, and “additional and further relief.” An exact amount, however, is not requested.

However, because it is likely many of these sellers are located outside of the US, how much impact this will actually have remains unclear.  But Amazon previously has banned sellers who paid for reviews and they are asking for details on which sellers purchased reviews, so they could be targeting Amazon sellers via the fake reviewers.

Other platforms have been dealing with fake reviews and their impact on the value of their reviews.  Yelp has also targeted fake reviews, going so far as checking private messages on Yelp to confirm paid fake reviews.  But paid Amazon reviews can be harder to spot, especially since some of the paid reviewers will even do a “verified purchase” review, provided they are compensated for the product price.

This will be worth watching to see how it progresses through the courts as well as the fallout for those Amazon sellers you paid for fake reviews through Fiverr.

Google has released a new version of the Google quality rater guidelines, a year after the last … END_OF_DOCUMENT_TOKEN_TO_BE_REPLACED