Yelp announced that they have released 61 new “Consumer Alerts” on the Yelp pages of businesses who have been found to be spamming the review system through either multiple reviews from the same IP address or who have been found offering payment or discounts for fake reviews.

The businesses are flagged with alert notices for up to 90 days. 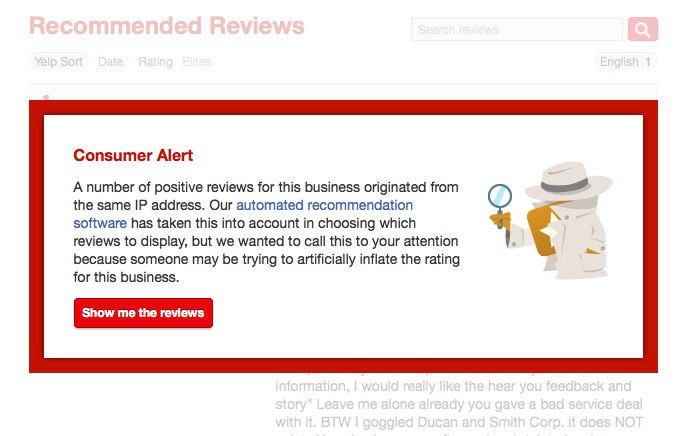 But what is most interesting about these new ones is that Yelp is now using private messages on Yelp as evidence to find those soliciting fake reviews.

For example, imagine you were considering using Atticare, a home cleaning company in New Jersey, or JCA Mechanical Plumbing & Heating in New York City, each of whom were the subject of private messages through Yelp offering money or gift cards in exchange for reviews on Yelp. Or if you decided to buy a car from Hooman Nissan in Long Beach, CA, where an employee was caught sending messages to Yelp users offering Clippers tickets in exchange for a 5-star review and even requested including his name in each review.

It isn’t clear if Yelp is only using private Yelp messages for paid review evidence if it has been flagged by someone or if it is doing some sort of automated scanning of messages specifically looking for evidence of paid or fake reviews.  However, it is a clear warning that people shouldn’t message others directly on a service they are trying to scam in some way.

On Yelp pages that have been flagged with the consumer alert, Yelp is also giving visitors the option of the company’s misdeeds.  For Atticare, Yelp shows this as evidence.

However, not all businesses show evidence.  For example, AAA Anytime has their page flagged, but clicking evidence doesn’t show anything except a small alert above the reviews.

I am surprised that they “only” found 61 violations, however it is awesome that Yelp named and shamed multiple businesses in their blog post who were caught spamming the reviews.

Google has released a new version of the Google quality rater guidelines, a year after the last … END_OF_DOCUMENT_TOKEN_TO_BE_REPLACED