You are here: Home / Google / Are Brand Keyword Costs Rising in Google AdWords? Experts Speak Out 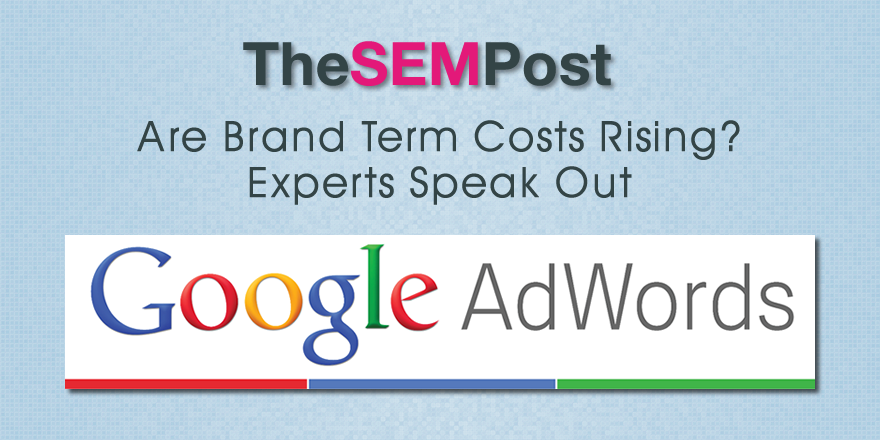 Adage recently ran an article stating that advertisers are seeing the costs in brand terms rising in Google AdWords costs.

Several different marketing agencies are claiming the price of branded cost-per-click Google AdWords has ballooned by as much as 141% in the last four to eight weeks, causing speculation to swirl throughout the industry.

So we decided to ask a group of high level pay per click experts on Google AdWords to see what they are finding in their own client’s work when it comes to rising brand costs in AdWords.

First, it’s important to make a distinction as to what we mean by brand keywords. [Macy’s], for example, certainly sounds like a purely navigational brand query that (regrettably) the brand still must pay for lest it lose some screen real estate. Historically the idea/hope was that if all went well, those keywords would be cheap and negligible as a proportion of the total marketing budget, especially if you’re executing properly.

Various Levi’s words, on the other hand, are product searches, not “brand queries.” So those may be fair game for the usual CPC auction pressures. If agencies are talking about competitive auction pressure, they’re really talking about increasing marketing budgets from Amazon, and umpteen other competitors. That has little to do with “brand keywords” per se.

Strictly speaking of “brand queries,” we’re seeing a fair bit of consistency in our advertiser base. Although costs have generally risen, there has been nothing alarming.

Google studies every way it can to extract a higher CPC from advertisers without sparking an exodus from the auction. So if one had to speculate as to what is going on here — with larger advertisers noticing a shift in their landscape — I’d say that Google’s ongoing tweaking of Quality Score may be offering less “incumbent protection” in a few massively important verticals like hotels. Let’s say that up until recently, Hilton was able to easily outbid the Trivago guy on searches for “Hilton Chicago,” but now, the rakish Trivago guy, Expedia, and bobshotelsearch.net are all getting more impression share as Quality Score has turned slightly less punitive on them. That means the average CPC Hilton pays to main its hold on top spot creeps up.

Where Google’s approach to such keywords may have indirectly helped large brands in the past, it sounds like they’re experimenting with ways to help them less. Having watched their impressive quarterly financials since they went public, what I’d expect from Google.

We’re not seeing an increase in branded CPCs for our B2B clients. If anything, CPCs are down slightly across the board. That said, we’ve seen a big increase in mobile CPCs with the launch of Call-Only Campaigns in late June. Mobile CPCs have risen an average of 30% since Google made the move to call-only campaigns – and that’s with us using a bid management algorithm to try to maintain our CPA.

At Five MIll e’re seeing higher brand CPCs across many accounts in line with what other firms are reporting. Average CPC inflation over the last 2 months or so is around 40%.

This is despite seeing higher CTR’s in many brand campaigns as a result of higher mobile traffic on brand and a broader base of ad extensions in rotation/testing on ads.

Though Google quotes in the ad age article that there is no “artificial minimum” CPC I’ve heard from other Google representatives in the past that there is actually a CPC floor for all keywords where you don’t show if you don’t bid above this threshold. That minimum can be thought of as an “invisible” competitor ad. If the minimum is .50, expect to pay at least .51 to get exposure.

Typically brand ads are given a high max cpc due to the high performance. If google were to raise the bid floor on many trademarks, it would likely lead to immediate CPC increases given that brand ads are typically “overbid” significantly.

It runs the gambit, but there could be SOME truth to the rumors.

We have a b2b e-comm client where brand (their brand name) CTR dropped and CPC’s increased. There were no changes that pointed to WHY this happened and Google reps tried to tell us QS had dropped even though we still had 8’s, 9’s and 10’s. We’ve been able to get CTR back up and drop the CPC’s, but we are still not in the same place we were when 2015 began.

Have another client that is lead gen and has seen Google brand search CPC’s increase since March. The first few months CTR was flat while CPC increased, but the past 2 months CTR has dropped and CPC spiked further. And again another that is also lead gen where CPC’s have increased steadily through 2015 with an inverse decrease in CTR.

In all cases the question must be asked: all things being equal (competition, Quality Score, etc.), why is CTR dropping and CPC increasing on brand keywords? In one case we’ve been able to improve, the other 2 examples the problem persists.

Advertisers should be reviewing their impression share regularly (an indicator of competition) and CTRs which both impact CPC. Looking at one metric for brand, CPC, is not an indicator of a Google conspiracy.

Statement from Google via Adage Article

Google responded to the speculation by issuing a statement to Ad Age Thursday, saying that the recent fluctuations in CPCs “are often a reflection of how advertisers might be bidding on different terms.”

“Depending on various factors in the auction, advertisers may see changes in core metrics and impressions for some of their keywords,” the statement said.

Google has released a new version of the Google quality rater guidelines, a year after the last … END_OF_DOCUMENT_TOKEN_TO_BE_REPLACED