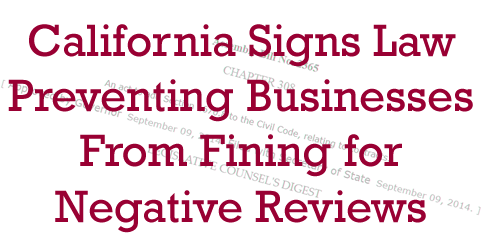 Last month, a story broke about a hotel, the Union Street Guest House in Hudson, New York, that was fining brides and grooms if any of their wedding guests posted a negative review on a site such as Yelp.  Not surprisingly, it generated a huge amount of negative publicity for the hotel.

This week, Governor Jerry Brown of California signed a law that will fine a business up to $10,000 for a business contract the prevents customers from leaving negative online reviews about their experience with the business.  The law will be enforceable in 2015.

This bill would prohibit a contract or proposed contract for the sale or lease of consumer goods or services from including a provision waiving the consumer’s right to make any statement regarding the seller or lessor or its employees or agents, or concerning the goods or services. The bill would make it unlawful to threaten or to seek to enforce, a provision made unlawful under the bill, or to otherwise penalize a consumer for making any statement protected under the bill. The bill would impose civil penalties upon any person who violates the provisions of the bill, of $2,500 for the initial violation and $5,000 for each subsequent violation, as well as an additional penalty of $10,000 if the violation was willful, intentional, or reckless. The bill would authorize the consumer, the Attorney General, or a district attorney or city attorney to bring a civil action for a violation of the provisions of the bill. The bill would provide that the penalty set forth in the bill is not an exclusive remedy, and does not affect any other relief or remedy provided by law. The bill would not prohibit or limit a person or business that hosts online consumer reviews or comments from removing a statement that is otherwise lawful to remove.

This law was first introduced in February 2014, so it wasn’t specifically in response to the Union Street Guest House Case, but could have been as a result of an earlier case by Klear Gear that attempted to bill customers $3500 for violating a non-disparagement clause preventing negative online reviews.  Klear Gear eventually lost the case.

This is the first law in the US that prevents businesses from fining customers for negative reviews, however now that California has passed one, it wouldn’t be at all surprising if other states to the same.

Google has released a new version of the Google quality rater guidelines, a year after the last … END_OF_DOCUMENT_TOKEN_TO_BE_REPLACED