You are here: Home / Local / Should Yelp Flag or Remove Listings Where Owners Fine for Bad Reviews? 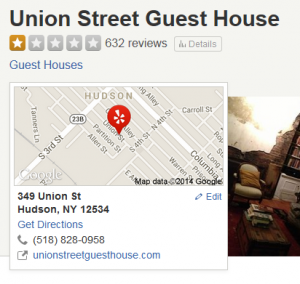 A story broke about a hotel that caters to wedding parties would fine the bridal couple a $500 fee for every bad review left by a wedding guest on Yelp or another review site.  This fine would be taken from the deposit the Union Street Guest House in Hudson, New York collects when a couple plans a wedding at their venue.

The fine not only applies to the bridal couple’s guests, but also applies to any guest who attends any wedding in the area and stays at the Union Street Guest House.

If you have booked the Inn for a wedding or other type of event anywhere in the region and given us a deposit of any kind for guests to stay at USGH there will be a $500 fine that will be deducted from your deposit for every negative review of USGH placed on any internet site by anyone in your party and/or attending your wedding or event. If you stay here to attend a wedding anywhere in the area and leave us a negative review on any internet site you agree to a $500. fine for each negative review.

They have since removed this from the website, although you can now view it on archive.org.  And Forbes points out that other reviewers had been threatened about the negative review fine.

They also made a statement on Facebook trying to say it was a joke, but they since removed this comment as well (Mashable as a screenshot).

The policy regarding wedding fines was put on our site as a tongue-in-cheek response to a wedding many years ago. It was meant to be taken down long ago and certainly was never enforced.

Of course, this also backfired in spectacular fashion when people who read the article decided to post their own reviews on Yelp stating their displeasure with such a policy.  Yelp is removing these reviews, however the pace of the 1-star reviews left by people unhappy with their policy is rapidly outpacing any removals.

Of course, this isn’t the first time that a company has tried to fine someone for leaving a negative review.  Kleargear.com tried to fine customers $3500 as per their “non-disparagement clause” for negative reviews left on RipOff Report, and even sent the fines to a collection agency, which resulted in those customer’s credit scores being affected.  In the end, customers sued Kleargear and won a default judgement for $306,750 in June 2014, however it is unclear if they will be able to collect on it.

But what role should Yelp or Trip Advisor play in situations where a business is clearly trying to extort people with threats of a $500 fine (or any amount for that matter) for daring to leave a negative review?  If a hotel or restaurant decides to fine guests for leaving a bad review, should Yelp or other review sites flag the listing that the company is attempting to suppress bad reviews by fining people?

Then there is the slippery slope.  If others begin to follow suit and charge fines for negative reviews, then the legitimacy of the reviews for that business would be completely skewed in favor of glowing ones.  For example, if a wedding guest had a horrible experience, but they knew the bridal couple would be fined $500 if they left a bad Yelp or Trip Advisor review, they would be very unlikely to go through with the negative review.

While review sites are getting better at filtering troll results – although it obviously isn’t always instant as the reviews for Union Street Guest House shows – it will have to get a lot smarter to determine when businesses are using strong-arm tactics to prevent negative reviews.

Google has released a new version of the Google quality rater guidelines, a year after the last … END_OF_DOCUMENT_TOKEN_TO_BE_REPLACED