You are here: Home / Facebook / Facebook Will Transfer Likes from Fan Pages to Official Page Without Owner’s Permission 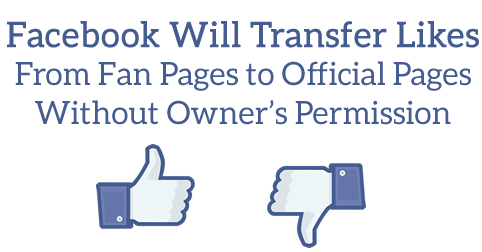 If you have a Facebook fan page, be aware that the official brand can simply ask Facebook for all your fan page likes, and Facebook will hand them over before shutting down your fan page – without your permission.

A woman created a fan page for The Game and had 6.2 million likes on her page, and was considered key in the show making a comeback from its cancellation on The CW with a resurrection of the show on BET. The creator, Stacey Mattocks, was negotiated with BET for both a part time position maintaining the site or to sell the fan page to BET.  However, they were very far apart in price – BET wanted to pay $15,000 while Mattocks wanted $1.2 million.  For more details, Marketing Land did a piece on what happened according to the lawsuit.

Courts ruled that Facebook likes do not have a value (despite BET seeing value in wanting those likes handed over to the official page).

Based on the record, Mattocks cannot establish that she owns a property interest in the “likes” on the FB Page. As explained in Part I.A, “liking” a Facebook Page simply means that the user is expressing his or her enjoyment or approval of the content. At any time, moreover, the user is free to revoke the “like” by clicking an “unlike” button. So if anyone can be deemed to own the “likes” on a Page, it is the individual users responsible for them. Cf. Bland, 730 F.3d at 385-86 (holding that public employee’s “like” of political-campaign page was a protected form of free speech and expression). Given the tenuous relationship between “likes” on a Facebook Page and the creator of the Page, the “likes” cannot be converted in the same manner as goodwill or other intangible business interests. See, e.g., Freeman v. Corbin (In re Estate of Corbin),391 So. 2d 731, 732-33 (Fla. 3d DCA 1980).

Even if Mattocks could claim an ownership interest in the “likes” on the FB Page,she cannot demonstrate that BET’s migration request was unauthorized or wrongful.  After Mattocks breached the Letter Agreement by limiting BET’s access to the Page,BET asked Facebook to migrate the “likes” to the other official Series Page. Facebook then reviewed the FB Page in accordance with its corporate-brand policies and determined that BET’s request was valid. More, as already explained, no substantial evidence shows that BET’s request violated any other legal duty to Mattocks.

With essentially no value being assigned to a like and that the page creator has no ownership over those likes, official brands who have wildly popular fan pages just might get greedy and decide to do the same – even though they face the possibility of pissing off their fan base.  However, in the case of Mattocks and BET, there didn’t seem to be strong support behind Mattocks, despite her building a highly successful Facebook fan pages (including other fan pages that have not yet been transferred or otherwise taken over).

We finally have the first Google Quality Rater Guidelines update of 2022, and like usual, it is … END_OF_DOCUMENT_TOKEN_TO_BE_REPLACED