You are here: Home / Facebook / Facebook’s Video Ads Have Option to Pay After 10 Seconds of Viewing 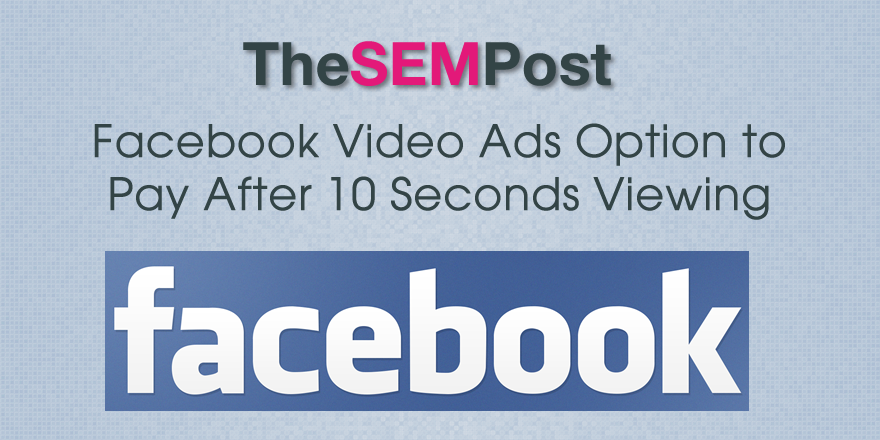 Think of this as Facebook’s own version of the ten second rule.  Facebook will allow advertisers to purchase video ads that will only be charged after they have been viewed for a minimum of 10 seconds, according to a report from the Wall Street Journal.

For advertisers running video ads on Facebook, it means they can either chose to run their videos on a cost-per-impression basis, which is how they are currently offered, or on the ten second minimum view basis.  It is unknown how the pricing will be different, however it is widely expected that the minimum view will charge a premium, since the advertiser is guaranteed their brand will be before the users for at least those ten seconds.

But it also means those advertisers are getting free branding and marketing for those video ads from anyone who views it for less than ten seconds.

Facebook argues that its ads provide value to advertisers the instant they’re displayed, even without sound. The company said it was providing the 10-second option after receiving feedback from advertising partners.

“We don’t believe it’s the best option in terms of capturing the best value and brand objectives marketers care about, but we want to give them control and choice over how they buy,” a Facebook spokeswoman said.

This new ad option will be rolling out to advertisers on Tuesday.

It isn’t clear if there is a minimum video length for the new video ads – after all, Facebook wouldn’t want advertisers to run videos shorter than 10 seconds.  And it is also unknown whether interactions made on the video, such as shares, likes or comments, will result in a charge to the advertiser, even if the total view time is under ten seconds.

This is a nice change since Facebook had been receiving plenty of negative feedback from advertisers that they were charged for the video ads from the moment it appeared on a Facebook user’s screen – even if merely scrolling past and when the user never engaged with the ad at all.  Many users who dislike video ads were in the habit of simply hitting the page down key in order to prevent them from playing, but advertisers were still having to pay Facebook for these minimal views.  This change will go a long way to making advertisers more confident in utilizing video ads on the platform.

It is also seen as a step to make it as attractive as YouTube to advertisers.  YouTube has long had many ad options for advertisers, including pre- and post-roll ads, the option to allow an ad to be skipped after a few seconds or not, as well as the key ability to only pay when a video has been viewed for a minimum of 30 seconds, or until the end of the video, for those tat run shorter than 30 seconds in total.