You are here: Home / State of the Industry / First Look Into SEMPO’s Code of Ethics Plans 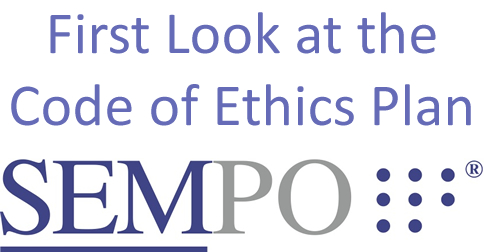 Many SEOs have been concerned when the news broke about SEMPOs plans to create and potentially enforce a code of ethics on the SEO industry.  At Pubcon, SEMPO held an information meeting to give more details on how they plan to create and implement the code of ethics.

Tony Wright, the CEO of WrightIMC led the meeting, detailing how he sees the entire process of creating a code of ethics.  He sees the code of ethics as not being SEMPO led, but as a grassroots experience instead.  He wants SEMPO to simply organize it to come to a consensus of what it will contain.

Wright doesn’t want to see groups forming strictly so they can have a delegate involved in the code of ethics process, so every group that wants to be involved needs to meet some requirements, including being at least a year old and having governing bylaws.  Each group that has at least ten members will be able to send one delegate – however, larger groups don’t get more delegates, so a group with ten members and one with 300 will still only get to send one delegate each.  Each local SEMPO group would have their delegate, and Wright stated while he will be involved in the code of ethics process, he would not be considered a delegate.

Consensus for Inclusion into Code of Ethics

In order for something to be included in the code of ethics, 75% of the delegates must agree to include it.  But if the process breaks down into a hung jury where nothing can be agreed on, then the process starts over with new delegates.  Wright also said that if delegates feel we don’t need a code of ethics, then none will be made.  They see it as likely taking two days to complete the process.

US only or North America?

There is also the question of whether it should be US only.  Canada was mentioned specifically with the possibility that it could be a “North American code of ethics”, however it could end up being only the US.  They do see it as something that could be done internationally after this one is completed.

Fees to Support Code of Ethics

All groups who want to be a part of the code of ethics and abide by the guidelines will also need to pay a “nominal” fee to support it, although it wasn’t clear if this would be administered by SEMPO, if it would be part of the SEMPO membership fee, or how much the fee would be.

Groups Outside of “Search Marketing” in the Industry

There is the question of what groups would qualify as being a “search marketing group”… would it include web developer groups?  Affiliates?  Wright said that it would be self regulating in a way, so if a group identifies itself as being in the search marketing realm, they can be included in the process and send a delegate.

For those who aren’t members of any groups sending delegates, everyone is welcome to the ratification of the code of ethics, when that happens, but only the official delegates can vote.

The question of alternative groups other than strictly “local” organizations was raised, such as one of the many virtual groups and communities.  WebmasterWorld, an online marketing forum, was mentioned specifically and other types of similar online groups could also send a delegate, even though they aren’t a formal group and don’t have bylaws.  However, how these types of groups would qualify is still to be determined.

What Would Be Policed?

Wright says he wants to see the code of ethics be strategic and not tactical.  For example, he doesn’t want to police the length of title tags.

People definitely have some strong opinions about SEMPO being the driving force behind a code of ethics.  The speaker’s enclave at Pubcon had a spirited discussion about it, but the SEMPO led meeting was very low key and non-confrontational.

There is some concern that those represented in the local and other groups might not actually represent the best people who could really contribute to designing the code of ethics – not all of the top experts in the industry belong to a local group, often because there simply isn’t a local group to join.

As the various groups begin organizing and naming delegates – if it does make it this far – we will have a much better idea if this plan might actually come to fruition and an idea of where these code of ethics are leaning.  And of course, everyone has an opinion about whether the industry even needs something like this, how it could possibly be policed, and if items actually important do get included by those who are named as delegates.

Google has released a brand-new Google quality rater guidelines, coming close to a year after the … END_OF_DOCUMENT_TOKEN_TO_BE_REPLACED