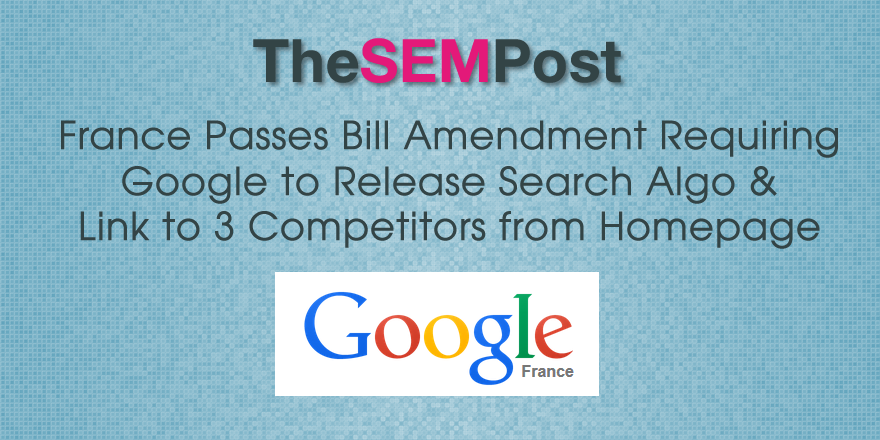 The war by France against Google is escalating as France’s upper house of parliament voted to not only require Google to give up their search ranking algorithm, but to force it to include links to three other search engine competitors – including one from France – on their Google homepage.  The Senate passed the amendment to the bill late last week, however it still has more steps before it becomes law.

“Fear of the monopoly power of big American websites is growing in France and Europe,” said French lawmakers in their amendment. “The behavior of certain powerful players is threatening the pluralism of ideas and opinions, harming innovation, and obstructing the freedom to do business.”

Interestingly, Emmanuel Macron, France’s economy minister, spoke publicly against the amendments as he felt this should be the role of the European Competition Commission to decide.  However others, including French Senate member Catherine Morin-Desailly, argued that the EC is too slow in their efforts.

Despite it not mentioning Google by name, it is clear that it is targeting Google with an estimated 90% of market share in France.  And Morin-Desailly has tweeted plenty of anti-Google news in her stream recently.

The passed amendment does not automatically result in it becoming law, according to Tech Times.

The decision of French senators doesn’t mean that the amendment has been put into law. The bill itself has already been adopted by the French National Assembly and the senate will vote on the bill on May 12. It will then be for a joint committee between the Assembly and the Senate to discuss the differences between the bill and its amendment.

But if it is passed and Google is forced to give up their algorithm as well as link to competitors, it will be interesting to see if Google just decides to pull out of France entirely… and that would not be the best for users in France.

We have more industry reaction in our article France Wants to Force Google to Reveal Search Algorithm published last week.

H/T to Angie Woodhead for the translations.

Google has released a brand new version of the Quality Rater Guidelines, the third one this year.  … END_OF_DOCUMENT_TOKEN_TO_BE_REPLACED