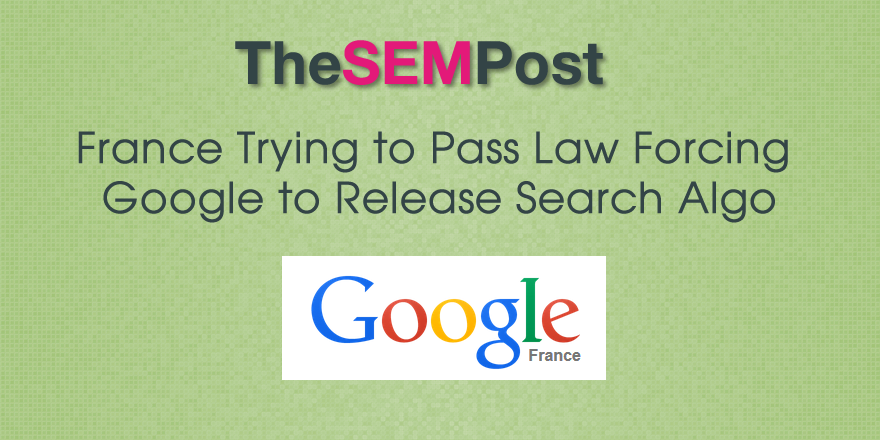 France wants to force Google to hand over their entire search algorithm in a new law they are attempting to pass targeting the search giant.

The heart of the issue is France’s belief that Google’s algorithm unfairly favors its own properties in search results, a situation that is expected to bring antitrust charges in Europe as early as this week (they have now opened the investigation).

The Commission isn’t a stranger to imposing massive antitrust penalties on companies.  “The Commission has imposed antitrust penalties on others in the past, Intel was  €1.1bn in 2009, and Microsoft €516m in 2013,” says Dave Naylor of Bronco.  “The question I would be asking if I was Google is more what’s the fine if they prove anti trust with the source code or without it.”

It is hard to believe that a country could force Google to give up what are essentially proprietary trade secrets.  But if it does in fact become law, what would be Google’s response?  A pull out as we’ve seen happen in Spain with Google News, rather than comply?  However, the entirety of Google’s search engine, and the associated income, is significantly different than simply pulling a non-revenue product such as Google News.

“My belief is Google will do whatever it can to stop that, including paying fines or pulling out of Google France,” agrees Kristine Schachinger of Sites Without Walls.  “It wouldn’t be the first time Google has ‘punished’ a market. Think Google News or Google’s relationship with China. Will the citizens of France be happy if their government forces that issue and they are suddenly without the Google engine? Hard to know, by I’m guessing not, so there will be political pressure to settle this without that caveat. ”

“It’s an interesting development,” says Bas van den Beld of Linkdex.  “Though I don’t really see it happening that Google will have to make their algorithm public, Google seems to be in distress somewhat. Their internal e-mail as well as the blogpost ‘The Search for Harm’ show a lot of distress.

“Personally I can’t see Google giving up the algo any time soon and what would happen if that code was given to the French government – could they keep it private?” asks Naylor.

What it could mean for SEOs and users

Obviously for webmasters, while some would welcome the publication of Google’s search algo, in reality the SEO game would become that more complex if everyone knew exactly what they needed to do, including all the nuances that the various search algos contain, in order to rank #1… unfortunately, so would everyone else.

For users, this would be even worse.  We could very likely see spam sites ranking at the top, simply because they followed Google’s algo criteria to the letter.  And having spam sites rank at the top for most search queries would be disastrous for user experience and could easily be the tipping point that pushes searchers to alternative search engines without the problem.

“If it did happen, it would be a field day on Google SERPs,” says Schachinger. “There’s a lot of verticals where the application of that knowledge would be almost instantaneous and spam would be released in such proportions as to be impossible to fight.”

“If it would happen, it would be as if Coca Cola had to give up their recipe,” says van den Beld. “It would be a wildfire of SEOs trying to ‘game’ the system and there would be those who would try and copy Google to become a competitor. Like with Coca Cola however, it would probably fail. Because it will be too difficult to copy and it would be a mess with everybody doing the same thing. Now that’s armageddon!”

And from a competitive point of view, it would arguably be handing Google’s search competitors it’s “secret sauce” for high quality search results, something that competitors are still working to achieve.

“If Google thought that the code was leaked to a competitor, could they demand competitor’s source code?” asks Naylor.

“Besides that it will be difficult to ‘beat’ the brand Google,” says van den Beld. “But it won’t happen. What we can expect probably is more regulations and maybe some fines. If not, we have a script for a movie ready!”

There are still a few steps required before this would become law in France, but it is something they are pushing for.

The French senate is likely to adopt a bill this week which would allow the country’s national telecoms regulator to monitor search engines’ algorithms, with sweeping powers to ensure its results are fair and non-discriminatory. The French initiative will become law only if it is adopted by the senate and the lower house of parliament and will also require government backing.

Of course, there is the question of how this will affect Google and the way they present their search results?

“I have serious doubts it will get to that point,” says Schachinger.  “But I think the bigger question is, will this scare Google? If so what changes will Google in the EU see and would that transfer to the US given our FTC found similarly, but did nothing much about it.”

“Can of worms comes to mind,” says Naylor.  And that probably sums it up perfectly.