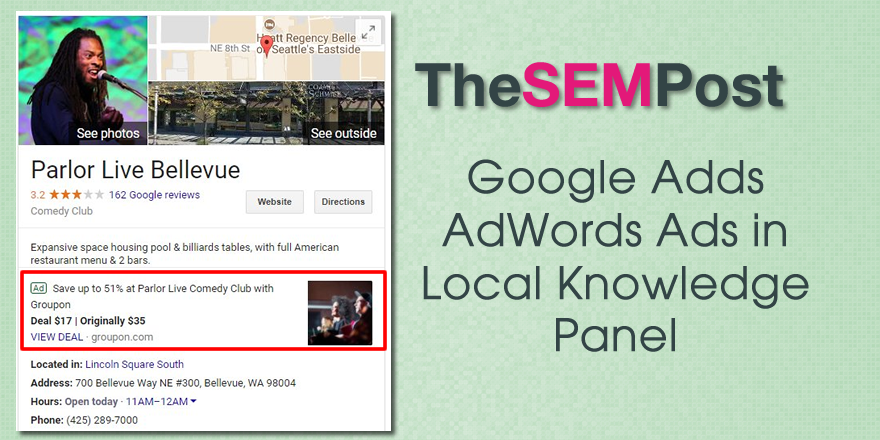 Google is now adding AdWords ads directly into the local knowledge panel in a new test in the Google search results.  The ads appear immediately below the business description, and before it lists relevant information such as location, address and hours in a test Google is running in the search results.  This is a huge change if it goes live for all searchers. 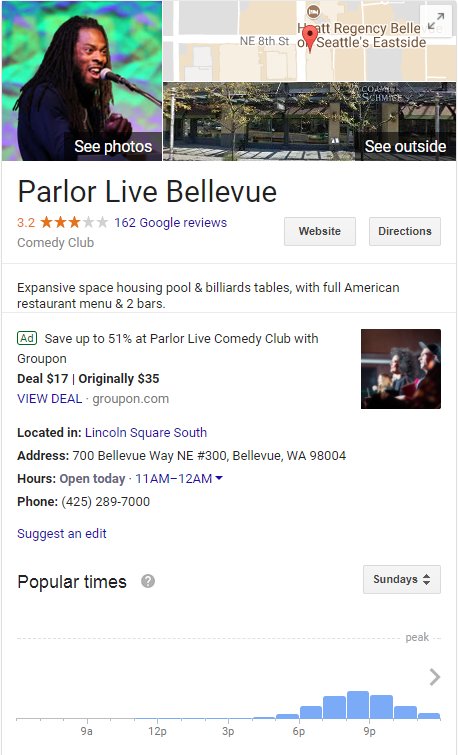 The ads are blended extremely well within the knowledge panel.  It does have the “Ad” tag that we are familiar with, but it still looks as though it is part of the organic content of the panel for those that don’t notice the “Ad” tag explicitly.

The ad includes a thumbnail.  Google isn’t pulling an image from the local business “see photos” section, but it seems to be provided by the advertiser, as it is the image shown on the advertiser’s landing page.

But what if other types of advertisers could also place ads here?  If so, it could mean that competitors could potentially get their ads front and center in a company’s knowledge panel.  And there are many companies that would be willing to pay AdWords for this kind of ad opportunity.  As a simple example, what if Lowes could advertise in the Home Depot local knowledge panel?  Or if Burger King could advertise in McDonald’s local panels?

But for the business actually shown in the knowledge panel, finding a competitor’s ad showing up within the local information would make many of those businesses quite unhappy.  But in practice, being able to bid on a competitor’s keywords in the search results is something that is quite common.

That said, in the local space, it is quite common.  In Yelp, they show ads underneath the first few review snippets for a business, which show competing businesses.  Facebook does the same for local business pages too.  So what Google is doing isn’t outside of the normal in the local space.  But it is still a huge change for Google to start doing it.

I have reached out to Google for more information on the test and how advertisers can test it out, as it is highly likely to be a beta test.

Update: A Google spokesperson confirmed the test to The SEM Post.  “We’re currently experimenting with new ways to surface helpful and relevant local information to users on Google Maps and Search. Maintaining a good experience for our users is our top priority and based on feedback, we’ll determine whether to roll these changes out permanently and broadly.”

We finally have the first Google Quality Rater Guidelines update of 2022, and like usual, it is … END_OF_DOCUMENT_TOKEN_TO_BE_REPLACED