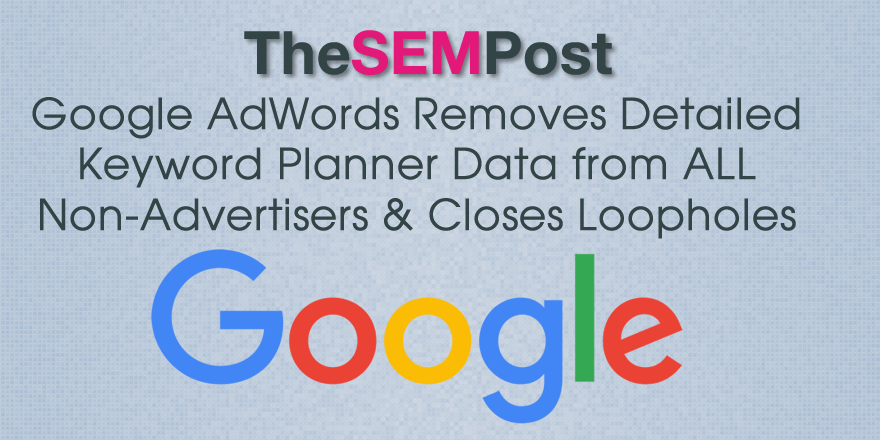 Google has continued their removal of detailed data from search marketers.  Now, all legacy accounts (even those that weren’t currently advertising but had previously advertised via AdWords in the past) now only see the general monthly search range instead of the detailed data they previously were able to see.  And Google has also closed the loopholes that made it possible for non-advertisers to see the detailed data.

Google began removing access to detailed monthly search data earlier this year, although at the time AdWords claimed it was a bug.  Last month it expanded the removal from non-advertisers, but it still left access to legacy accounts.  It was then revealed that bots were the reason for the removal of detailed keyword data, presumably from the many third party keyword tools.

Google recently added an advertiser spend threshold to access the detailed estimates in Keyword Planner, where it would show 103,000 monthly searches instead of the search range of 100k-1M… data that isn’t helpful to most advertisers and SEOs trying to make informed decisions regarding keywords.  However, Google will not reveal what these thresholds are, but they presumably will prevent those from spending $1 a month, or pausing a brand new campaign, from seeing unlimited detailed monthly search data.

Google also closed loopholes that non-advertisers were using to still see the detailed data as well.

This is a huge loss for SEOs who were dependent on this information for making informed decisions on keywords to target and content to create.  While it is true that it is an advertiser tool, SEOs have used the Keyword Planner (and its previous incarnations) for many years and this effectively makes the tool’s data unusable unless they also invest in AdWords campaigns to essentially pay for access.

Here is what the new estimated data ranges look like:

Google made the new restrictions to Keyword Planner access on Friday.

Google has released a new version of the Google quality rater guidelines, a year after the last … END_OF_DOCUMENT_TOKEN_TO_BE_REPLACED