You are here: Home / Google / Google Confirms Penguin Set to Be Real Time, But Still No Date 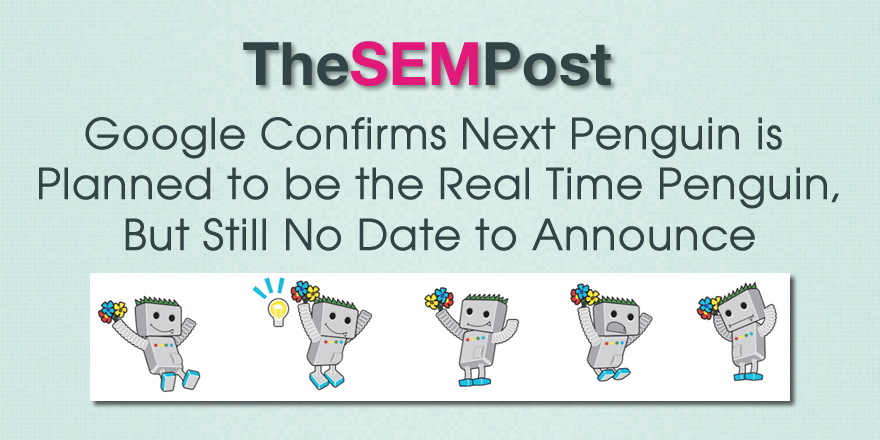 We have been eagerly awaiting an update or refresh for Penguin and multiple people asked the question in today’s Google Webmaster Hangout.

John Mueller confirms they are working on a Penguin, but as usual, he has no date to announce.  But he does talk about the real time aspect, and that is fortunately still the plan for the next time we see Penguin.

He does go on and explain in detail why he doesn’t give dates for updates, and it is primarily because things change or need to get fixed, so dates get pushed back – this is similar to the situation we saw earlier this year where Gary Illyes pre-announced that the Panda refresh was coming, but it ended up taking longer than expected before it finally was released.

At Google, in general, it is such that when people are working on something that’s getting ready to launch, there are a lot of steps involved in making sure that the launch actually goes really well, so that is something where sometimes it just takes a while to get everything all lined up properly and sometimes that can result in delays, sometimes that can even result in things rolling out a little bit faster.

When asked if we would see something by the end of the year, he said this.

I don’t feel comfortable making  that far in the future decisions,  so I would guess, but yeah, it’s really hard to say.  Sometimes we see things where we have all the internal information all lined up, we’re going to launch this in 2 or 3 days,  and everything is going to be awesome, and then something pops up and then we say well we have to fix this problem first or there’s something with this data, and it gets delayed for a couple of days or maybe a couple of weeks.

So from that point of view, if it’s more than a month out, then hey, we can’t really say anything.

He was asked if this would be the “real time” penguin update and he confirmed it is.

But he wasn’t able to say if we would be a regular penguin refresh if the real time penguin would take longer than expected, or if we could see something by the end of the year.

I don’t know, maybe.  I can’t really make promises like that.  I mean, if something really goes wrong, and we can’t do our plans at all, then maybe we have to find a different way to do that, maybe we just have to be more patient, I don’t know, there are lots of options.

SEOs have been waiting almost a year for a refresh or update – the last time it ran was October 17, 2014.

We finally have the first Google Quality Rater Guidelines update of 2022, and like usual, it is … END_OF_DOCUMENT_TOKEN_TO_BE_REPLACED