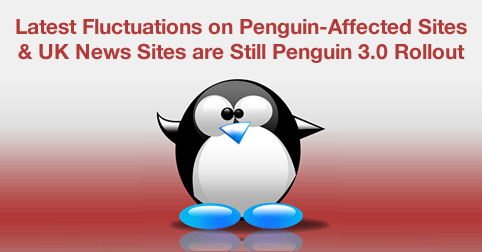 Google has confirmed that the recent changes related to Penguin that many webmasters have been noticing since last week are indeed still Penguin 3.0 rolling out. Many webmasters have been noticing extreme fluctuations in search results on previously affected Penguin websites, particularly with some of the websites that were hit with the original rollout of Penguin 3.0 in October.

Here is what we know about these latest changes.

While webmasters had been anticipating that Penguin would rollout for several weeks, it is now month and a half later and that rollout is still ongoing.

There definitely does seem to be a bit of a roll back from the initial Penguin released in October. There are reports that many sites have recovered from the initial Penguin 3.0 hit, however since this latest “larger fluctuation” began on Friday, there is definitely been a “roll forward” so to speak, with some of those recovered sites only being temporarily recovered and are now back under Penguin 3.0. So some of the ranking gains and losses that were reported on Thanksgiving and Black Friday have now been reversed.

The extreme news site fluctuations in the UK is also penguin

there’s been a lot of reports that UK news sites have been shuffling around in the search results significantly. I confirmed with Google that this isn’t any new algo update, but rather Penguin 3.0 marching on.

There’s definitely some confusion that maybe in addition to this extreme Penguin fluctuation that there was also the new algo release affecting things. However, this is the case.

The latest changes also appear to be somewhat international, as many of the reports for sites impacted in the recent changes are for international sites.

When asked about whether this was a new Penguin and whether the UK news ranking changes were Penguin or something new, a Google spokesperson said “Penguin is continuing to roll out, so (in both cases) you’re likely still seeing the effects of that.”

The Google spokesperson also said “There’s continual speculation that’s not actually related to anything changing on our end.”

When will this rollout complete?

Many were originally anticipating that the rollout would finish within a few days or perhaps a week of the initial release, so seeing an extended rollout of this long is definitely surprising. And of course if you are affected by Penguin you should start to clean up immediately, not wait to see where your site lands whenever Google finally completes this rollout.

Will it ever end?

It also raises the question of just when will Penguin 3.0 end, or if we will see this turn into an eternal update with Google constantly cycling new algo points into this one as it continues.  Google has said they prefer a constantly updating algo over one that hits big and then doesn’t change for some time, like we have seen previous versions of Penguin do.  Time will tell if Penguin 3.0 does turn into one of these, but it is definitely looking like it.

Google has released a new version of the Google quality rater guidelines, a year after the last … END_OF_DOCUMENT_TOKEN_TO_BE_REPLACED