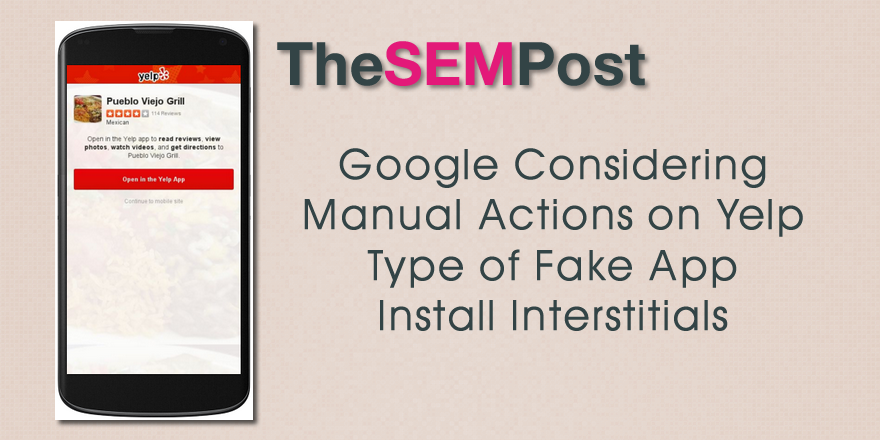 If the fact some sites have been getting their mobile friendly tags in the search results along with the associated ranking boost, despite still serving what is essentially an app interstitial, it appears that Google is looking into taking action….manual action.

Here is an example of what users see when they visit Yelp’s mobile page: 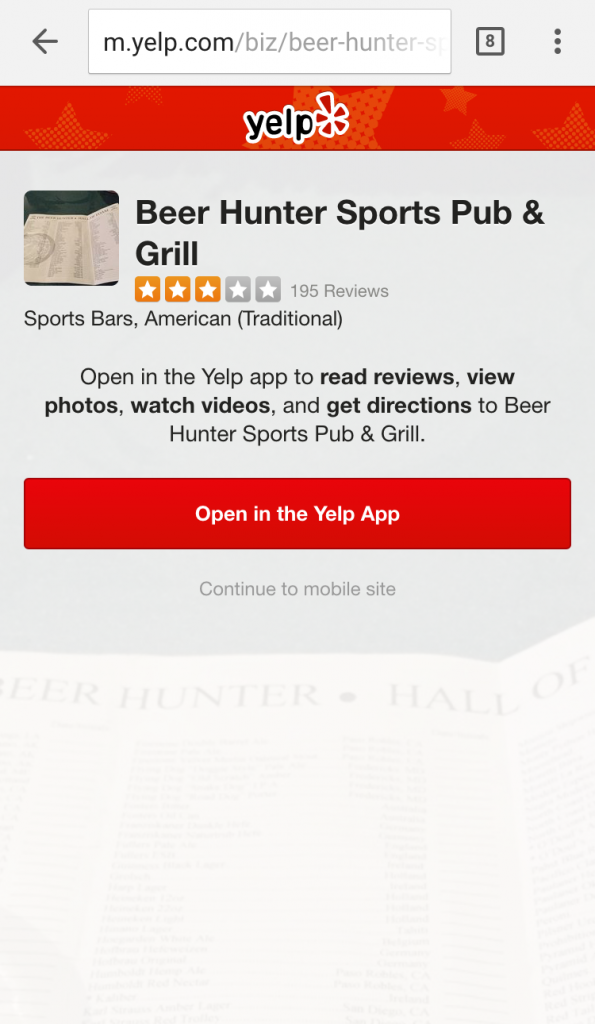 And when scrolling down far enough – well past what is on the visible mobile screen, you discover the page’s content hiding far below. 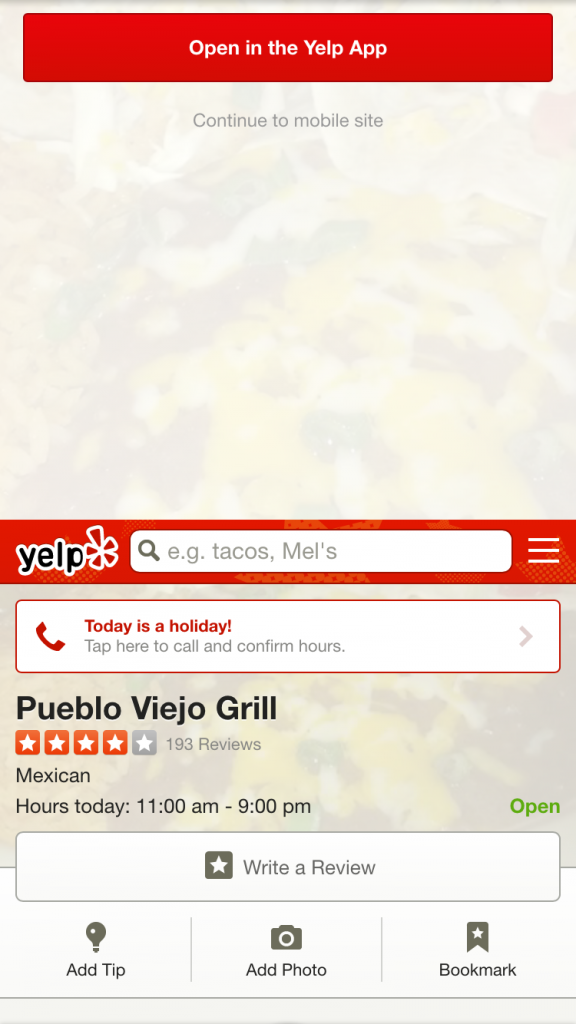 Stoppelman felt that because Google was still using them on some properties, that they couldn’t be bad for users.

@glenngabe @jenstar if it's "bad for users" why do they use it everywhere? Have seen it for YouTube, Gmail, Maps, etc.

@glenngabe @jenstar Google's position makes no sense. 1. They use them extensively. 2. They allow interstitials ads but not ads for apps.

In yesterday’s webmaster hangout, someone questioned the use of Yelp’s fake app interstitial, and if this was something sites could also do or if it would be a problem.

We’ve looked into a number of these and we’ll probably have to try to figure something out on how to react appropriately to issues like that. So it’s essentially trying to… I don’t know specifically what Yelp is doing, what you’re seeing there, because I don’t use Yelp all that much.

But it’s essentially something where people are trying to get around our policies, where we say well, we don’t want you to run an app install interstitial and they tweak it so that technically it’s not really an interstitial.  But actually from a user interface point of view, it does look a lot like an app interstitial.

So those are the type of things where we are considering maybe taking manual action and saying well we need to flag this as an interstitial even if it isn’t flag from our algorithms. I think that the teams are definitely aware of these kinds of situations and they’re trying to figure out how best to respond to that.

Of course, manual actions can have many forms.  In this case, it is just likely that the manual action would result in the loss of the mobile friendly tag and ranking boost, and rightly so.  This would act just as if the fake app interstitials were flagged as actual interstitials.  However, manual actions in some cases can see entire sites removed from the search results, and if Google feels the spam issue is severe enough, they could go with partial or entire site removals for the issue.

Mueller was then questioned about what was a grey area, or where the line would be drawn for those essentially still wanting to game the app interstitial issue, or whether webmasters should follow the letter of the law.

Mueller responded and commented that this is something they are looking at – and have even gotten as far as drafting blog posts about the issue – but that Google has nothing specifically to announce yet.

I don’t know where we would draw the line specifically.  So I’ve seen some blog post drafts going around about that internally and for some of that maybe we can give some more guidance on what specifically to look for, but I don’t know that we have anything specific to announce just yet.

So if you are using this spam tactic, you might want to think about pulling back on the fake interstitials – or at the very least, have code ready to go that turns it off when Google does decide to act on it.

Depending if you are using them for app installs or you are a searcher who hates landing on them, there will be some pretty strong opinions on this potential change.

Google has released a new version of the Google quality rater guidelines, a year after the last … END_OF_DOCUMENT_TOKEN_TO_BE_REPLACED