Google is officially adding app interstitials to the mobile friendly test, a month after I spotted Google’s plans to add the change.  This means that webpages that serve users an interstitial when they click through from the Google search results will be impacted by this change.

Google has been warning for months that they were considering adding interstitials as a negative ranking signal, particularly for mobile users, so this isn’t a surprising change.

This change also comes following a study Google Search Console released this summer detailing bounce rates and install rates when using an app interstitial versus an app install banner instead.

I actually noticed that Google was adding app interstitials to the mobile friendly test at the end of July, but the information was removed from Google Search Console shortly after the post went live.  The date showing in Google Search Console was August 14th, so this change goes live a couple of weeks after it was initially discovered.

Google has also added app interstitials to the data anomalies page for Google Search Console, which is where I originally spotted the change. 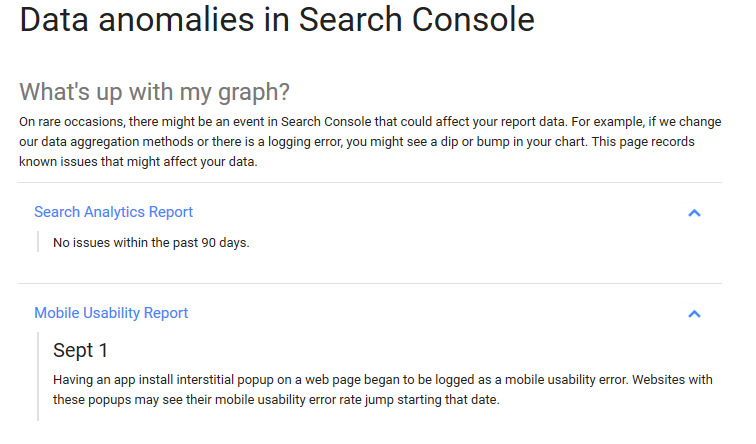 With a November 1st date, it gives webmasters plenty of time to change to app install banners.  However, for those who are tempted to delay the change as long as possible, remember that Google will need to recrawl all those pages in order to give them the mobile ranking boost after November 1st, so leave enough time for Google to recrawl those pages, particularly the ones most important from a mobile traffic perspective.

This is a great change for users, although I suspect some publishers and advertisers who take full advantage of app interstitials for mobile users will be less than happy.  But we should see some additional data on install rates and abandonment once people begin making the change away from app interstitials.

We finally have the first Google Quality Rater Guidelines update of 2022, and like usual, it is … END_OF_DOCUMENT_TOKEN_TO_BE_REPLACED