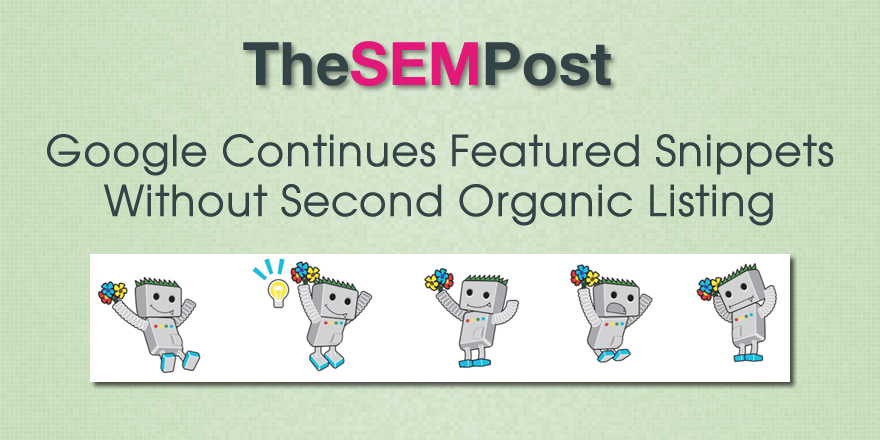 Google is continuing their widespread test of featured snippets that we reported here first on Monday.  It has Google showing a featured snippet at the top of the search results as usual, but while previously that result would be shown a second time in the organic search results, Google would drop that second listing entirely.

A Google spokesperson confirmed the test to The SEM Post.  “We’re always experimenting with ways to create the best possible experience for our users but have nothing to announce at this time.”

Many people are reporting that they are seeing this test, while others can only see it via incognito or while logged out, and others while logged in only.  If you are trying to view the results, try multiple sessions to try and trigger it.  This is an international test.

We also know the scale of the test, and it is significantly larger than the standard 1% (or less) tests that Google usually runs.  Dr. Pete Meyers tracked the change via Mozcast, and they saw about 5% of the Mozcast searches showing search results that had a featured snippet without the result appearing a second time in the regular organic search results.

Confirming that, of the Featured Snippets @MozCast captured last night, about 5% of the URLs were not ranking on page 1.

He also confirmed it is impacting domain diversity, another metric that Mozcast tracks.

@mozcast People have been seeing this come and go, and we've seen domain diversity bouncing around this week, so appears to be an active test.

No one seems to be reporting much traffic loss over the test, which likely means the majority of the clicks where on the featured snippet rather than the second organic listing shown lower on the page.  We do know that a great featured snippet result will get a very high CTR.

There is also concern about possibly dropping sites from the search result because it has the featured snippet, when for the best results, they should appear.  But on the ones I tested, they still are showing – for example, a search with IRS as a keyword shows a featured snippet, but the entire rest of the page being shown are also pages from the IRS official website that aren’t being filtered at all.