You are here: Home / Google / Google: Do HTTPS Migrations Separate From Other Major Changes 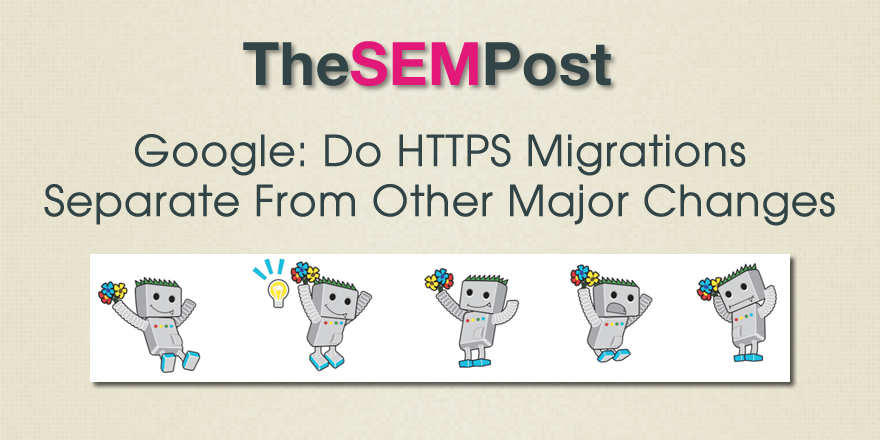 Migrating a website to HTTPS has taken increased importance this year with changes Chrome is making to flag sites as insecure.  But migrating to HTTPS is a major change that can cause temporary ranking losses, which can be longer term if the site owner doesn’t follow best practices for making the site HTTPS.

Some site owners also add other unrelated changes to the https switch as well – such as changes in site design, URL structure, categories etc.  But from a best practice perspective, is it best to take the “get it all done with at once” approach, or should site owners tackle HTTPS migrations separately from other changes.

According to Illyes, you should do your other changes and migrations first, and then tackle HTTPS on its own as a separate migration.  At Brighton SEO, I asked whether people should do HTTPS as its own migration.  Here is Illyes response:

Yes, yes please, always. If you are doing any sort of site move, don’t change everything at the same time. If you want to do a redesign of your site then redesign the site. After that, once the ranking fluctuations have gone away because if when you redesign your site, it’s I can almost guarantee that you will see ranking fluctuations. And that is normal, that is working as intended.

But, don’t combine redesign, with a URL structure change or site move or moving to HTTPS or crap like that because you are going to shoot yourself in the foot, and with a cannon pretty much.

Illyes also mentioned bugs that can occur with HTTPS migrations.  He said most have been fixed, but there is also the possibility that it is easier to debug a HTTPS migration gone bad when it was the only change made at the time, as opposed to a situation where multiple things were changed at once along with the HTTPS part.

That said, it is up to the site owner to decide if they want to add HTTPS along with other major changes at once.  Some sites do multiple things at once without much of an issue.  But it seems now that doing HTTPS on its own will be a much smoother transition.

And HTTPS migrations, when done on its own, should not impact rankings anymore.  While previously it could take 3-4 weeks for rankings to recover after a HTTPS migration, this is no longer the case.

Google has released a new version of the Google quality rater guidelines, a year after the last … END_OF_DOCUMENT_TOKEN_TO_BE_REPLACED