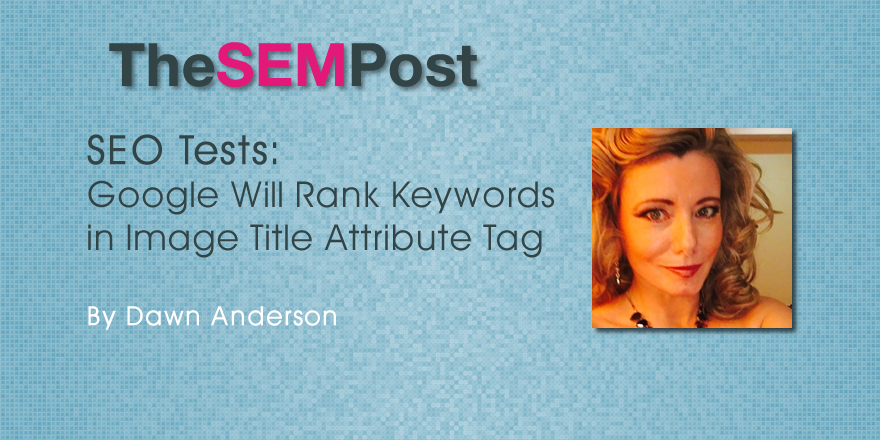 The topic of ‘Does Googlebot still see and use img=”title” for ranking of images in Google Images?”, recently came up in discussion in a post on SERoundtable, based on a Twitter conversation between Google’s John Mueller and myself.

To add context, I had been auditing a project and came across the use of ‘onmouseover’ for img titles (NOTE: NOT IMG=”ALT” that most are familiar with), and given that ‘onmouseover’ is a Javascript event it occurred to me that Googlebot Images would not see this because, as we know, Googlebots do not fire Javascript events.  They are thought to not do ‘onclick’, ‘onhover’, ‘onmouseover’, or any variations of ‘on’ anything.   Googlebot images (nor any of the other 9 Googlebots) do not fill in forms or click buttons (perform actions).

As I was writing up an audit document I thought it would be prudent to quickly confirm that ‘onmouseover’ would not be seen by Googlebot to ensure that I was providing accurate information so headed over to Twitter to ask @johnmu whether this were so.

My question was very much around the use of ‘onmouseover’ events, rather than about img=”title”, but Twitter, being Twitter with it’s 140 char limit means that a conversation on that application can be a bit easy to misinterpret.  I will concede however, that John did say here that img=”title” may be picked up, during the course of the conversation. 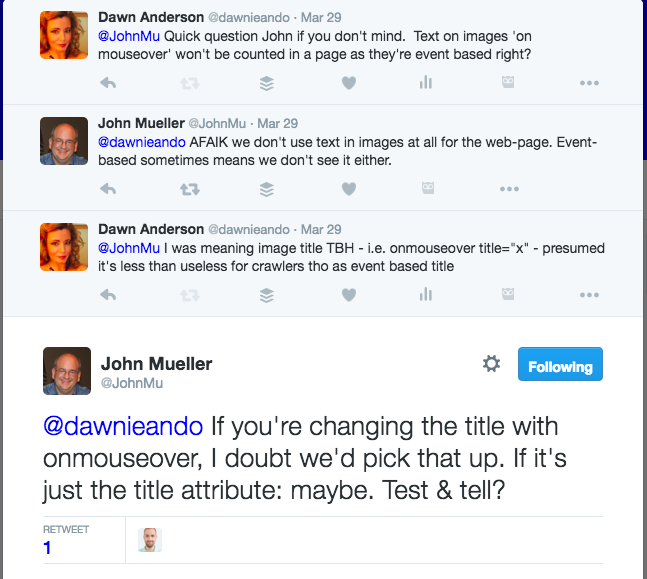 Conversation over, I went back to continuing with my audit, confident now that Googlebot would not pick up ‘onmouseover’ events on img=”title”.  My understanding was originally that Googlebot Images picks up img=”title” and uses it to rank images in Google Images, and that did not change.

The following day, whilst doing my daily sweep round of the various ‘latest search news’ blogs out there, I came across a post on SERoundtable reporting on my Twitter conversation with John Mueller which I thought may have misinterpreted what I was asking John about.

Remember that my original question was about the use of ‘onmouseover’, not about the use of img title=”x” per say.  Well, Barry (the author), had picked up on the conversation and noticed that John had said

“If you’re changing the title with onmouseover, I doubt we’d pick that up. If it’s just the title attribute: maybe. Test & tell?”,

which admittedly did appear to imply that Googlebot-image may not even pick up on img=”title”.  In any event, that was not what the original conversation was about so I added a comment on the blog post just to clarify this for the benefit of the other SERoundtable visitors.

I thought I’d chip in here really because my question was not even related to rankings it was more related to a particularly ‘thin content’ project I was reviewing whereby there had been the use of onmouseover (event) for the title tag on an image.

I felt that it was nigh on useless in any capacity and asked John to clarify this (i.e. suspected it would not be considered in any way, shape or form (not seen).

Alt tags for me should primarily be there for accessibility. More so, because I recently had the pleasure of meeting an accessibility ambassador (a lady suffering from Usher Syndrome with deteriorating eyesight and hearing who truly drove home to me the shocking job some organisations do at actually implementing alt tags for the purpose that they’re for in the first place.

That said, as Googlebot image does not gather the image alt text content at the same time as the image (i.e. Googlebot web takes it back for collation with the image as added context – confirmed by John in a recent Webmaster hangout at which you were present I recall), it is counted in the text based content on the page and for me does add some contextual relevance.

Obviously, not good to ram keywords into an alt tag for an image which doesn’t even have any bearing on the image itself just for the sake of trying to rank a bit more, but if the image is of something that relates to the content on the page, then why not utilise the alt text for both accessibility and to lift page context too?

Just wanted to clarify as I didn’t feel that the headline really told the true tale.

Now, don’t get me wrong, SERoundable (along with TheSEMPost), are my daily go-to places for information on what is happening out there.  I’ve learned loads over the years from Barry’s blog (SERoundable), and watching his weekly catch up video is an invaluable part of my routine, just in case something has slipped by which I haven’t noticed on the Twittersphere.  In addition to the learnings I’ve enjoyed, the entertainment value from some of the comments on the posts and back and forth bickering and arguing between those commenting has made me chuckle on many occasions.

I did feel that this post about img=”title” however was based on a misinterpretation, but it appears that not so.  John had answered my question on ‘onmouseover’ (i.e. Googlebot unlikely to pick that up), and had then gone on to say “If it’s just the title attribute: maybe.  Test & tell”.

Because this was a Twitter chat and it’s easy to put two and two together and come up with seven (i.e. misinterpret), during a recent Google Webmaster Hangout I asked John to confirm that Googlebot Image would not see ‘onmouseover’ events on images and to clarify whether Googlebot Image would pick up on img=”title”.  He said that indeed, Googlebot does not do ‘onclick’, ‘onhover’, ‘onmouseover’ as these are Javascript event actions, but that he wasn’t sure on img=”title”.   He suggested that maybe test it to see.

I made up a word for which there were no results at all in Google Images (and also in Google Web / All for that matter).  The word was “plinkyploppitypippity”.  (screen grab below dated Friday 8th April 2016. 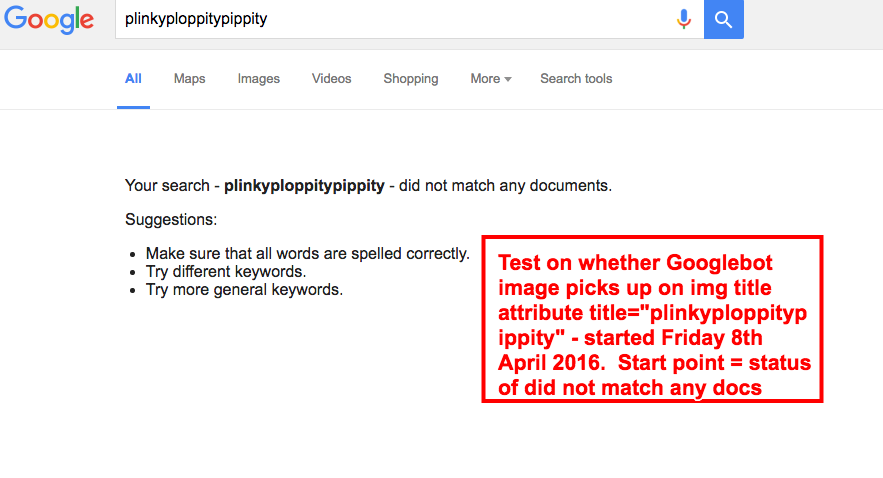 I then left it there and when about my business. 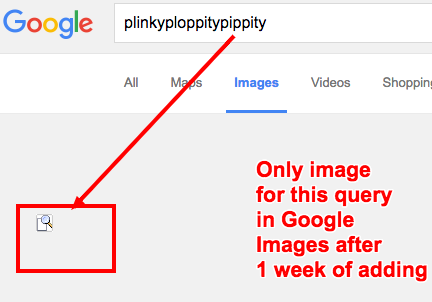 From the footer image that I had added.

So, there you have it.

It does indeed appear that Googlebot-images reads and ranks img=”title:x” for the text in the img = “title:x” after all.

For the avoidance of doubt, it still doesn’t read ‘onmouseover’.

Update: While Google is populating many images for that term, the test image is still 4th.

Dawn runs Move It Marketing and has been involved in SEO and web development for nearly 10 years, following a career change. Prior to this she ran her own businesses for 15 years. She specialises in technical and architectural SEO consultancy around crawling and indexing, working in competitive markets covering sports betting, insurance and personal injury and runs Move It Marketing as well as her own lead generation affiliate projects and ecommerce projects

We finally have the first Google Quality Rater Guidelines update of 2022, and like usual, it is … END_OF_DOCUMENT_TOKEN_TO_BE_REPLACED