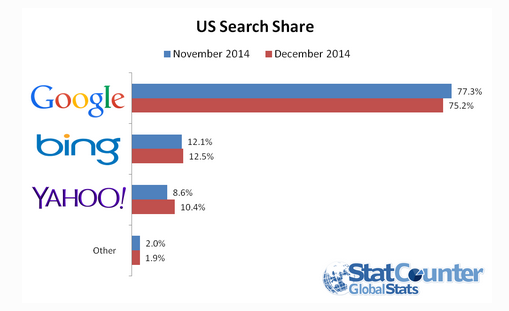 When Firefox announced that they would be changing their default search engine from Google to Yahoo, and many people were quite curious to see just how many Firefox users would be switching their search engine. And it would appear that the answer is quite a few as Google suffers the largest search share loss since 2009 while Yahoo saw its largest.

StatCounter is the first company to report on the impact that the Firefox Yahoo deal had on search share. They report that Google lost over 2% of their search share when comparing November 2014 with December 2014, when Google dropped from 77.3% to 75.2%.   This is the largest loss ever suffered by Google since StatCounter began tracking global search statistics in July 2008.

Yahoo, with the power of the Firefox default search behind them saw their search share jump from 8.6% to 10.4%

However, it will be most important to see statistics for January. For some less savvy users, they might not even realize right away that their search engine has been changed to Yahoo, and once they do there’s always the chance they could change back to Google, which would mean Google could take back some of that search share from Google

comScore will be releasing their own search share report for December in the middle of January.  comScore is considered the most accurate of the search share reports, so it is definitely worth watching to see if they’re reporting reflects what StatCounter sees.

We finally have the first Google Quality Rater Guidelines update of 2022, and like usual, it is … END_OF_DOCUMENT_TOKEN_TO_BE_REPLACED