You are here: Home / Google / Google: Machine Learning Will Never Take Over the Whole Search Algorithm 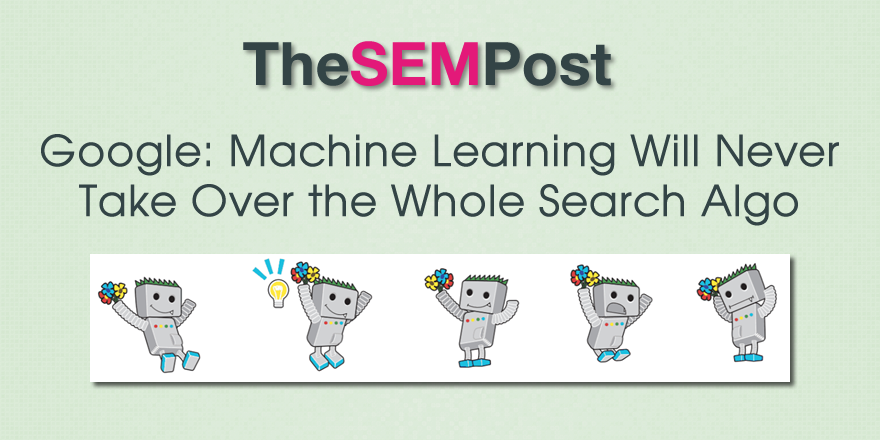 During the breakfast keynote at Pubcon last week with Gary Illyes and Eric Enge, the use of machine learning in the Google algo came up with RankBrain being discussed.  Enge then asked “It hasn’t taken over the whole algorithm?”

No.  I can probably say that it will never take over the whole algorithm, or the core algorithm.  It is one of the components we have in ranking.  And it’s really just one of the signals we have.

Machine learning is a tool.  It’s like having a Swiss knife.  You can use it for many things, it’s not appropriate for everything, but you can use it in many cases.  Just like a Swiss knife, you probably don’t want to try to use in concrete because it will not work.  The same way RankBrain will not work for all queries, but in other similar uses, it will really make your life much easier, so we are using it where we can.

Obviously we are not trying to replicate all our manual algorithms, that doesn’t make sense for us.  If it is working well, we prefer not to touch an algorithm.  But we are experimenting with what else we can do with ranking and in other products in general with machine learning.

Enge then asked why they wouldn’t use machine learning whenever possible.

But for those expecting that Google would be changing their entire Google search algo to a machine learning one, it seems like this is not on Google’s roadmap anytime soon.

We finally have the first Google Quality Rater Guidelines update of 2022, and like usual, it is … END_OF_DOCUMENT_TOKEN_TO_BE_REPLACED