You are here: Home / Google / Google Manual Actions on a Subdomain Don’t Affect Rest of the Site 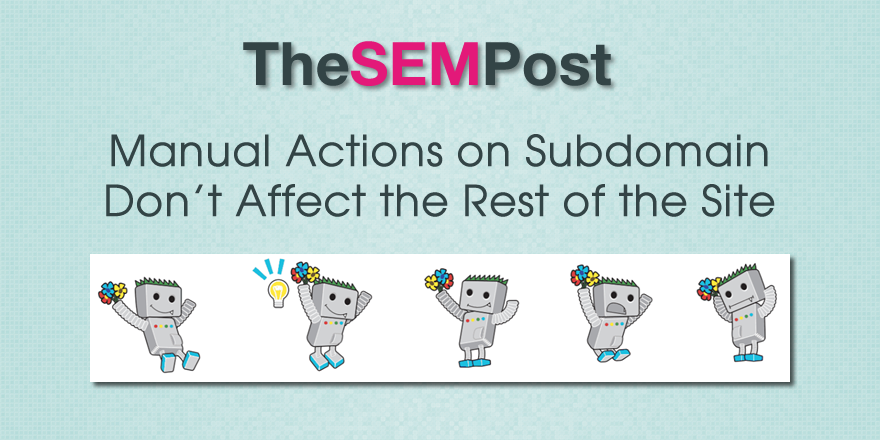 In a recent Google webmaster help thread on the forums, an interesting question was raised about whether a manual action received on a subdomain on a site could impact the rest of the site that is not on the subdomain. And the answer is no.

John Mueller responded to a help thread where a dev site, created as a subdomain on the site, had been indexed and then spammed via a CMS exploit.  And because it was a dev site, it went unnoticed by the webmasters until a manual action notice was sent – which was sent to the main site, not the dev subdomain.  And apparently the site doesn’t have to worry about the manual action having any negative effects on the main site.

If the manual action was specific to the subdomain, then that wouldn’t – from a manual actions point of view – have an effect on the rest of your site. If you’ve taken care to remove all of that, then after a reconsideration request things should be fine.

This certainly does throw a wrinkle into the “subdomains and subfolders are treated the same by Google” argument.  If someone is doing aggressive SEO, then using subdomains would have its advantages from a manual action  point of view, provided all subdomains didn’t get hit at the same time, which could be very likely with those types of penalties.   However, in this specific case, it was a dev version of the site that had been ignored and then spammed via a CMS exploit, so in this situation, the rest of the site wouldn’t be spammed like this as well.

That said, there are many sites that host individual users on subdomains (such as how Blogger.com hosts many different subdomains for unrelated users), so having one bad apple spamming having an impact on everybody’s site on the subdomain wouldn’t be good.  And sending the notice to the root domain makes sense as many don’t add subdomains to their Google Search Console account.

Google has released a new version of the Google quality rater guidelines, a year after the last … END_OF_DOCUMENT_TOKEN_TO_BE_REPLACED