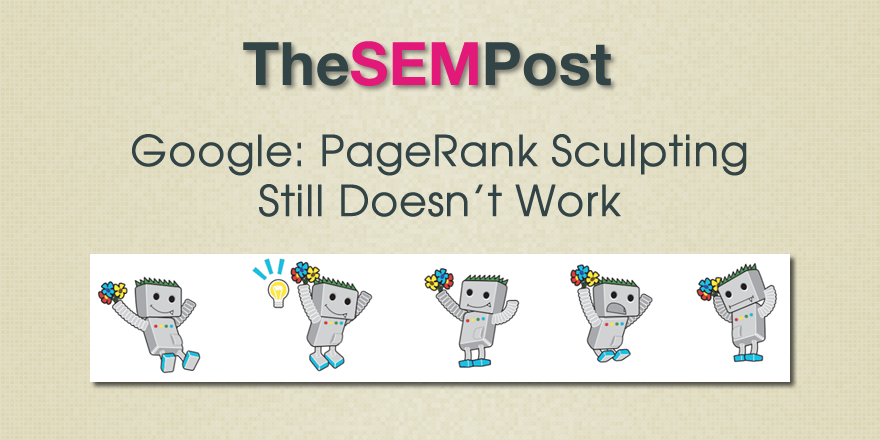 Years ago, PageRank sculpting was the “big SEO thing” and it seemed like all SEOs – at least those who followed the SEO forums at the time – were trying it out.  SEOs are still doing sculpting, although to a lesser extent, these days, but how effective is it?  According to Google, not at all.

Matt Cutts spoke out about PageRank sculpting six years ago (June 15, 2009) and explained why using rel=nofollow to sculpt PageRank wasn’t such a great idea from an SEO and Google perspective.

Q: Does this mean “PageRank sculpting” (trying to change how PageRank flows within your site using e.g. nofollow) is a bad idea?
A: I wouldn’t recommend it, because it isn’t the most effective way to utilize your PageRank. In general, I would let PageRank flow freely within your site. The notion of “PageRank sculpting” has always been a second- or third-order recommendation for us. I would recommend the first-order things to pay attention to are 1) making great content that will attract links in the first place, and 2) choosing a site architecture that makes your site usable/crawlable for humans and search engines alike.

For example, it makes a much bigger difference to make sure that people (and bots) can reach the pages on your site by clicking links than it ever did to sculpt PageRank. If you run an e-commerce site, another example of good site architecture would be putting products front-and-center on your web site vs. burying them deep within your site so that visitors and search engines have to click on many links to get to your products.

There may be a miniscule number of pages (such as links to a shopping cart or to a login page) that I might add nofollow on, just because those pages are different for every user and they aren’t that helpful to show up in search engines. But in general, I wouldn’t recommend PageRank sculpting.

Of course, the idea persists, primarily because Cutts said that most people running tests at the time weren’t able to notice whether it worked or not, and that still seems to exist today.

In today’s English/Hindi Google Webmaster Office Hours, the question came up, this time asked whether self linking in specific ways would be considered black hat or not.

You don’t get anything added with adding extra links to your website.  The PageRank sculpting and all those things don’t think they work anymore (the other Googler shakes his head to agree that they no longer work).

Syed Malik Mairaj shook his head to confirm that these techniques no longer work.

So while I am sure some SEOs will continue to swear by it in practice, the official word from Google is that it will no longer work.

I will include a link to the video when it is uploaded to YouTube.

We finally have the first Google Quality Rater Guidelines update of 2022, and like usual, it is … END_OF_DOCUMENT_TOKEN_TO_BE_REPLACED