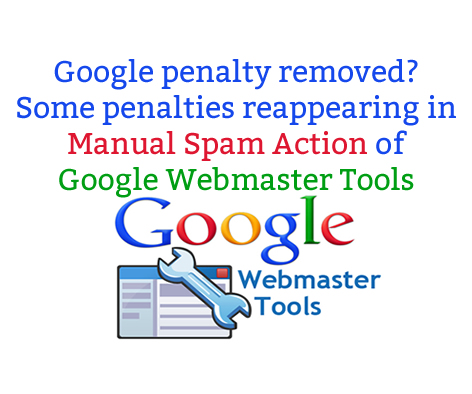 If you have had a manual action spam penalty lifted in Google Webmaster Tools, yet aren’t seeing an expected bounce back in the rankings, you might want to have an other look at your manual spam actions in Google Webmaster Tools once again. It seems that some penalties are showing back up, even after a reinclusion request has been successfully filed and the penalty revocation has appeared.

Marie Haynes of HIS Web Marketing, a well known SEO specializing in penalty removal, has noticed that some penalties are showing back up in the manual spam action area of Google Webmaster Tools.

“I have had 3 cases like this so far,” says Haynes.  “All three were partial actions for unnatural links.  The frustrating thing is that I can’t say for certain whether the manual action was ever removed from the viewer.  I have reviewed all of my emails to clients and can’t see one where I say that the manual spam actions viewer was clean.  But, I usually don’t send my final bill until I see that the actions viewer shows no manual spam actions.  I really think that all three of these had the viewer showing the penalty was clear and then somehow it just reappeared.”

She says a client had also noticed the same thing.  “I had one client contact me about a month ago to say that they noticed the partial action in their viewer.  We had removed their penalty about 2 months previously.”  Partial actions mean that it isn’t an entire site that is penalized, but rather a manual action penalty on specific pages, sections or links.

We had a manual spam action completely revoked on [date], yet we are still seeing a partial match action in our spam actions viewer.  Do we still need to remove more links?  Or is this a mistake?

Five days later, Haynes received a response saying “Manual spam action revoked” and several hours later, this appeared within the viewer, and has remained clean since.

“For all three of these clients there has been no ongoing unnatural link building since the penalties happened,” says Haynes.  “They definitely did not receive a new notification of having a penalty.”

So if you have received a manual action on any of your sites in the past, and have successfully filed a reconsideration request to get the penalty lifted, you should make a point of re-checking all those sites for anything in the manual action section of Google Webmaster Tools.  This includes even if you haven’t received an email from Google regarding any new or old penalties.

Update: John Mueller of Google commented on my Google+ post (need to click to see comments, hopefully he will respond more).

@jenstar @rustybrick @TheSEMPost @Marie_Haynes I have seen this happen — was revoked (not expired), then hit again within a day.

Update on the site where G forgot to remove a penalty. <24hrs after refilling we got a spam action revoked msg again. @jenstar @rustybrick

@rustybrick @jenstar @JohnMu I think this was a special case where G responded quickly bc they had made a mistake.

We finally have the first Google Quality Rater Guidelines update of 2022, and like usual, it is … END_OF_DOCUMENT_TOKEN_TO_BE_REPLACED