You are here: Home / Google / Google Planning to Devalue Content Behind Interstitials 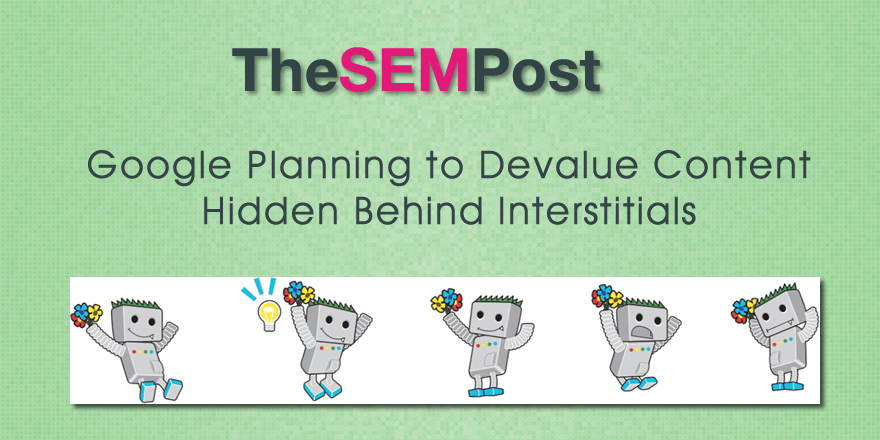 We have known for a couple of months that Google was planning to add interstitials as a negative ranking factor in an upcoming mobile friendly algo, but it appears that the same will be coming to the regular search results too.

Maile Ohye from Google warned webmasters at SMX Advanced that they will also be bringing up the issue of interstitials and how pages that use them will be affected.  “Interstitials are bad for users, so be aware this is something we are thinking about,” she said.

She then continued on to say that content hidden behind interstitials would be devalued.

While many mobile websites use interstitials specifically to redirect users to download an app instead of just visit the site, the vast majority of desktop served interstitials are monetization efforts, displaying ads or even a video ad that must be viewed before the user can read the article.

Many are in the form of “View this image ad for 10 seconds before you can visit the site,” a format that nearly everyone has run into while trying to read an article on sites like Forbes.  And they then require an additional click to then read the article, it does not automatically redirect the user (although some do).    Here is the example of Forbes.com’s interstitial.

It will also be interesting to see if Google also considers content hidden behind a “answer these survey questions to read the content”, as those sites are also effectively blocking the content from being read until an action is performed.  These particular ones are a pet peeve of mine, and I always click back rather than answer.

This, of course, leads to the question of whether they will devalue content with a pop-over or overlay, something that some people suspect has been a negative ranking signal, so many sites code it to only show up on a second page view and not the first, so Googlebot doesn’t see it.

From a user perspective, this is great news.  And since we all know Google does put searchers first, it is not surprising that interstitials are on a hit list by Google.

So if you are using interstitials, you will definitely want to consider whether the financial payoff from the interstitial is worth the potential loss in Google search rankings…. I am going to guess that interstitials will be on the losing side of that argument for many companies that become aware of this.

This is also something that could be included in Google Search Console, to alert site owners that Google has detected an interstitial and why they should consider removing it.

We finally have the first Google Quality Rater Guidelines update of 2022, and like usual, it is … END_OF_DOCUMENT_TOKEN_TO_BE_REPLACED