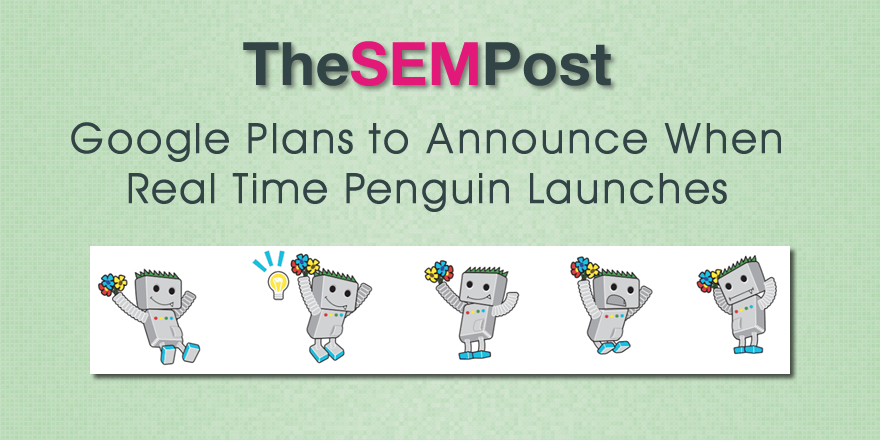 It sounds as though SEOs might not have to avidly watch the various Google weather reports for signs of Penguin after all… John Mueller said today that they will announce when the long awaited real time Penguin starts rolling out.

First, he didn’t announce a date to go along with these comments, which is hardly surprising.  He recently said that he didn’t want to give a timeline incase Google moved the date again, something we have seen happen a few times during the wait for the new Penguin.

I can’t give any timing on that, sorry.  I’ve kind of given too many dates that didn’t make it, so I don’t want to go out on a limb there and give that specifically.  Sorry.

He was asked specifically about whether or not Penguin is currently rolling out, based on chatter from SEOs.

I don’t have any information I can share on that at the moment.

So perhaps there is the possibility that Google is currently testing Penguin, as many people suspect, in the search results in a very limited fashion.

Then he did add that Google will likely have a message to announce when Penguin does start rolling out.

I’m pretty sure when we start rolling it out, we’ll have a message to kind of post, but at the moment I don’t have anything specific kind of to announce.

So SEOs might not have to keep a close watch on the search result weather reports if Google plans to announce the launch.

Added: Mueller said “plans” might be an exxageration, so it looks like SEOs just might have to be a slave to the weather reports for a while longer.

@JohnMu Aw, don't break the hearts of those who hate being a slave to the Google weather reports 😉

Here is the video from the start of the question:

Google has released a new version of the Google quality rater guidelines, a year after the last … END_OF_DOCUMENT_TOKEN_TO_BE_REPLACED