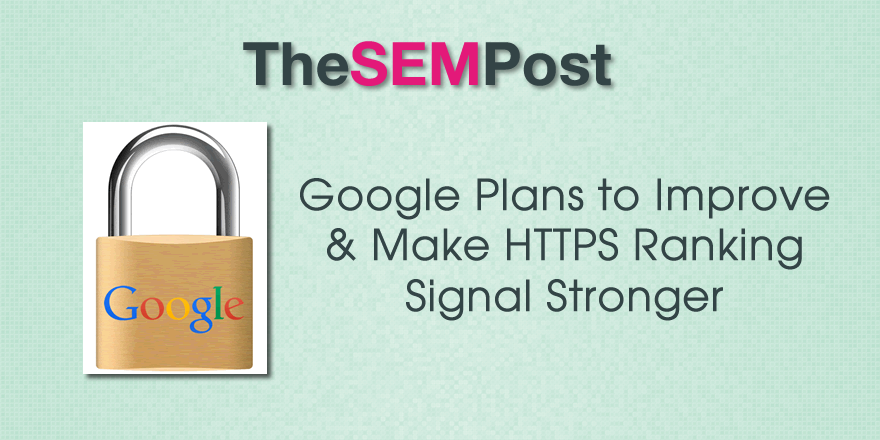 When Google first announced that HTTPS would be a ranking signal, a large number of webmasters jumped on the opportunity to get what was essentially a freebie boost in the search rankings simply by switching to HTTPS.  Later, John Mueller from Google announced that it was a very small ranking signal, something that Gary Illyes from Google recently clarified as acting more as a tie-breaker in the search results when two sites would otherwise be ranked the same.

At SMX Advanced, Danny Sullivan asked Illyes about HTTPS and if we would see secure search having a larger impact at some point in the future.  And the answer is yes.

Illyes said that HTTPS is super important and they do have plans to improve it and make it stronger, referring to secure search as “it’s my baby.”

He doesn’t go into detail about what could be changed to improve and strengthen it, so it could be simply making it a stronger ranking signal or there could be something changing in the signal itself.  Likewise, we don’t know when we would see changes, or if Google would pre-announce changes as they did with the mobile friendly algo update.

The fact Illyes has been out of the office a lot traveling to events is one of the reasons why we haven’t seen any changes with secure search as a ranking signal.

SEOs once again might want to start thinking about switching their sites to secure again, as many stopped working on it once it became known the boost for secure sites was fairly miniscule.  But with both Chrome and Firefox making changes or deprecations that would alert users to unsecure sites, switching over will become even more important for reasons completely outside of Google search.

We finally have the first Google Quality Rater Guidelines update of 2022, and like usual, it is … END_OF_DOCUMENT_TOKEN_TO_BE_REPLACED