You are here: Home / Google / Google Prepared for Possible Spam in App Indexing 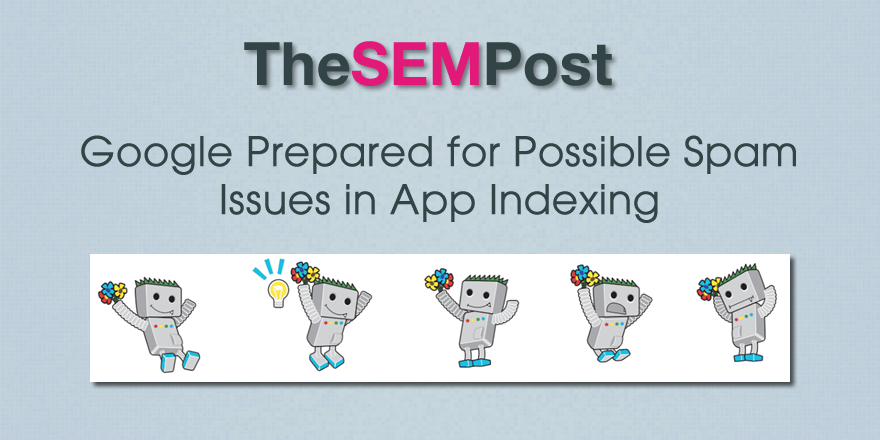 In yesterday’s app indexing hangout, Barry Schwartz asked if Google has seen any evidence of people trying to spam app indexing.  And they haven’t seen it as much of an issue, at least not yet.

Mariya Moeva from Google responded that she isn’t aware of any spam problems yet, but that it is definitely something on their radar as a potential problem.

Not that I’m aware of.  I am sure there will be enterprising people, and adventurous people, who would like to experiment, but as with any product at Google, we do take into account that this will happen.  So we’ve set quite a few things in place to make sure this is preventable and detectable and so forth.

John Mueller also responded and said that they have a lot of practice in dealing with spam at Google.

Because we tend not to see most of it in search, I’d have to say we have some really smart people working on recognizing these types of issues and hiding them in a way that doesn’t disrupt your experience.    So it’s something where especially if it’s a new technology, it’s worth keeping an eye on it and that it’s sometimes hard to now ahead of time exactly how people will try to kind of sneak their way through, but it’s certainly not something that we’re just going to be surprised by.

So if you are planning your app indexing spamming strategy, it sounds like they have plans to be able to catch it before it hits the search results.

We also know that there is an app indexing warning that would likely apply to these kinds of cases for “App-Indexed contents mismatch.”  But it will definitely be something to keep an eye on, especially if you suspect competitors might be up to spam.

Google has released a new version of the Google quality rater guidelines, a year after the last … END_OF_DOCUMENT_TOKEN_TO_BE_REPLACED