You are here: Home / Google / Google Reaching Out to Larger Third Party Sites to Get Embedded CSS & JS Unblocked 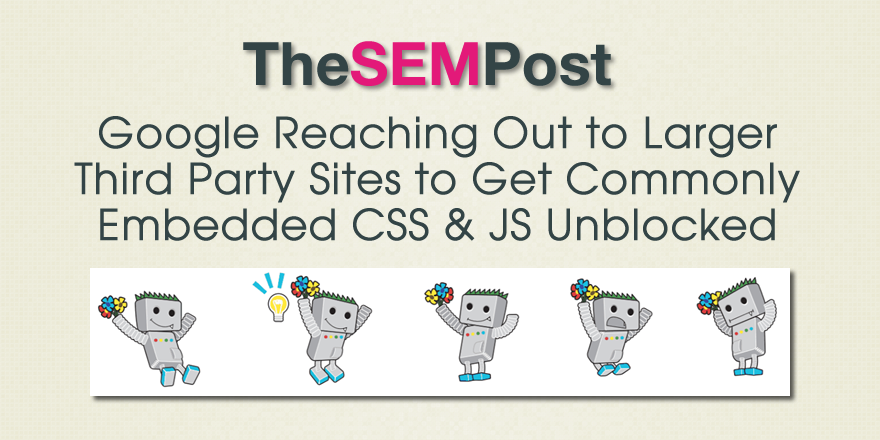 Ever since Google sent out the alerts asking webmasters to unblock all Javascript and CSS on their webpages, it has been a struggle with all the third party resources – including some from Google itself – that show up as an error in Google Search Console.  While Google has said that webmasters don’t need to be concerned about third party resources since they can’t control them, they also ask webmasters to contact those third parties to see if they can get the blocks on Javascript and CSS lifted.

In yesterday’s Robots.txt Webmaster Office Hours, John Mueller revealed that they are probably going to be contacting larger third parties that are blocking resources.  This is really great news.

We’ll probably be going out and reaching out to some of the bigger sites that have content that is embedded on other people’s sites so that we can make that more easily crawlable and indexable.  But you can also do that on your side, especially if you are working together with a local business provider, a local business directory that stores the opening hours for lots of businesses and pulls them in with Javascript.

Ironically, one of the examples that many publishers see in their Google Search Console is from Google AdSense blocking their Javascript from being crawled, so maybe we will see an end to that – or at least see it changed so it won’t be repeatedly flagged.

But since Google would see what it is that is commonly flagged for blocked third party resources, it will be great to see them being proactive from their end to see about getting these things unblocked, especially since being contacted by Google would carry considerable more weight than if random unknown webmasters asks.

While Mueller doesn’t say which sites they are considering contacting, hopefully it will be the ones that tend to come up over and over again, such as some common WordPress plugins and themes…. and Google AdSense.

We finally have the first Google Quality Rater Guidelines update of 2022, and like usual, it is … END_OF_DOCUMENT_TOKEN_TO_BE_REPLACED