You are here: Home / Google / Over 60% of Google Search AMP Clicks Go To Non-News Sites 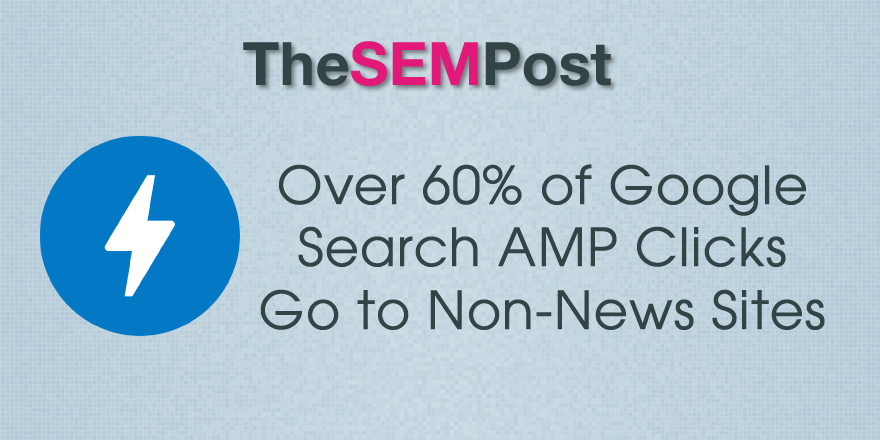 Google has released some new stats about AMP pages and one of the new stats should really make site owners and publishers take notice.  While AMP originally launched as primarily a tool for news sites, the expansion of that to non-news sites has grown tremendously.

Dave Besbris, VP of Engineering at Google, confirmed that now 60% of all clicks from Google search results are going to “non-news” sites at AMP Conf earlier today.

The types of publishers that have been making AMP pages have changed quite a bit since we launched.  In fact, AMP is now used for recipes, travel, retail, dictionaries, RapGenius and many other use cases.  In fact, over 60% of all the clicks to AMP pages in Google search go to non-news pages.

They also released some other updated stats on AMP.  There are now 31 million domains publishing AMP content.  And over 5 billion AMP pages have been published.

So we’re two years into building the AMP project and we’ve made tremendous progress together.  For example, now there are over 31 million domains on the internet publishing AMP and they published over 5 billion pages.  And this number has been growing a lot over the past year.

The fact non-news sites are getting well over half of all AMP clicks is pretty impressive. For site owners that have been putting off AMP, this might make some reconsider adding AMP to their sites, or converting parts of their sites that have AMP special features, such as recipes.

We finally have the first Google Quality Rater Guidelines update of 2022, and like usual, it is … END_OF_DOCUMENT_TOKEN_TO_BE_REPLACED