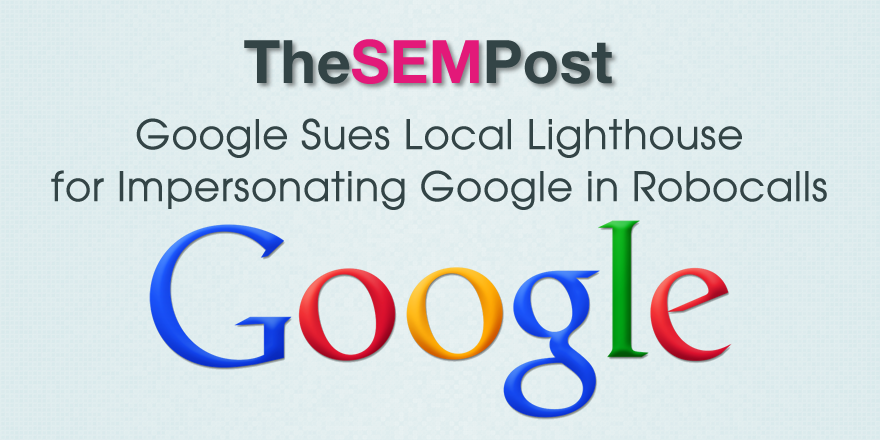 If you have ever been on the receiving end of one of Local Lighthouse robocalls claiming to be Google, you will be happy to know that Google has filed a lawsuit against the company for their business practices and particularly their marketing technique of referring to themselves as Google.

Google posted about the problem on the Google Public Policy blog, detailing the tactics these companies use.

You’re eating dinner with your family when the phone rings, and you see a phone number that you don’t recognize. You answer and hear a recording: “It’s extremely urgent that we speak to the business owner! We’ve tried to reach you numerous times. Our records indicate that your Google Business Listing has not been claimed…”

Google also revealed they were filing a lawsuit against an SEO company for using these tactics.

It’s difficult for Google to take action against callers because they often use untraceable phone numbers, fake company names, and massive global networks of intermediaries. However, today we’re filing an action in California against one search engine optimization company for making these robocalls and confusing our users. It’s unfortunate when a problem must be addressed in a court of law, but we believe this course of action will protect our users and discourage this practice more broadly.

Even Googlers had been on the receiving end of these type of robocalls, coming to their work phone:

If you robocall a Googler's work # with a scam about "urgently claiming your business listing," you're gonna have a bad time.

It didn’t take long for local SEO experts to uncover the lawsuit and discover Local Lighthouse is the company being sued and their scare tactics appear to be working – they boast about having 25,000 clients.  If you want an idea of their current clients, their Twitter feed is littered with their Pinterest spam for various local clients... as you could probably suspect, their SEO techniques are less than stellar.

@HesDave @bbb_us All complaints have been resolved with the client. Local Lighthouse has over 25k+ clients I would say thats pretty good.

Mike Blumenthal details the finer points of the lawsuit here, but it is obvious that Local Lighthouse has been subject to repeated warnings from Google about their business practices and impersonating Google in their sales script but refused to change their tactics.

For example, Google is informed and believes, and based thereon alleges, that Defendant’s sales agents have made statements such as: “We’re a Google subcontractor,” “we’re working for Google,” “the $100 fee [to initiate Defendant’s services] goes to Google,” and Defendant’s customers’ webpages “will show up multiple times on the front page and get what’s called ‘Front Page Domination.’”

There are many reviews about the business online that criticizes their misleading marketing through robocalls and the inability for recipients of the phone calls to get off their phone list.  They also recently added a “Local Lighthouse is Not Google” page within the last month or so.

Google also posted advice for those who receive robocalls.  And they added a new way for business owners to report these types of robocalls that state they are Google.  You can fill out this form to report a business impersonating Google.

This is good news that Google is taking action against companies implying in cold calls that they are Google, especially against a company that is so prolific in their robocalls.  It will be very interesting to watch and see how this plays out.

Local Lighthouse has yet to comment publicly about the lawsuit.

Google has released a brand new version of the Quality Rater Guidelines, the third one this year.  … END_OF_DOCUMENT_TOKEN_TO_BE_REPLACED