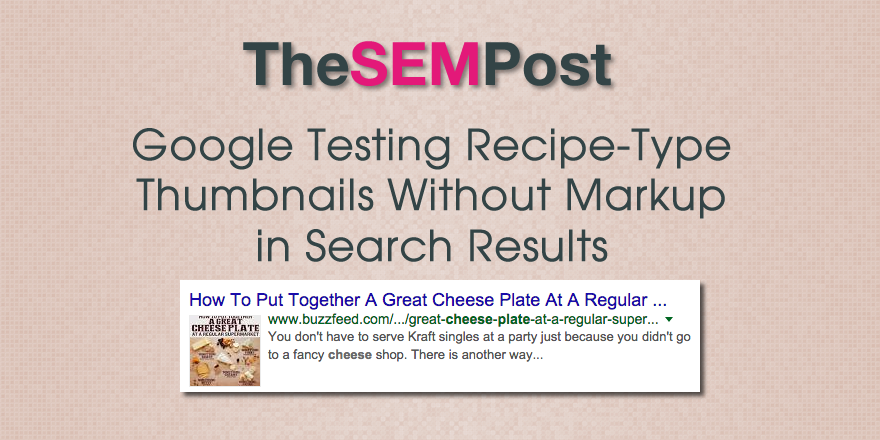 Ross Hudgens was the first to spot the test. The Buzzfeed article has no recipe markup and is not even formatted in a way where they have created a recipe-type look on the page.

It doesn’t show as a traditional recipe in the search results, where we often see ratings, calories, times and more.  So the only real difference between this result and a regular non-recipe search result is the addition of the thumbnail in the search results.  But it also means that some sites that do have recipes, even if not properly marked up, could display the recipe related image.

Note that the second example does have recipe markup, although it is not really a traditional recipe.

This definitely seems to be a test, as I couldn’t replicate it.  But this could be pretty significant if Google made this change permanent to show thumbnails in the search results.  Would it just be for food related queries?  Or could it move to products as well?  It definitely raises some fascinating ideas for where this could go.

Images getting pulled from blog posts without recipes that are still food based. First time I've seen that. pic.twitter.com/OBYtwXgzCZ

We finally have the first Google Quality Rater Guidelines update of 2022, and like usual, it is … END_OF_DOCUMENT_TOKEN_TO_BE_REPLACED