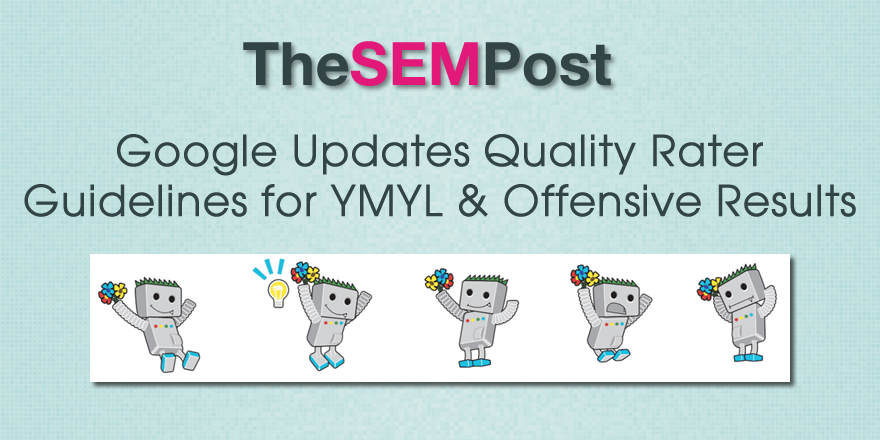 Google has made another update to the Google Quality Rater Guidelines, coming only a couple of months after the last release, which saw major changes made to target fake news, science denail and clickbait, among other things.

This updates sees Google bring added clarification to specific areas of the guidelines and other minor changes.  The biggest changes are to news sites with Your Money Your Life, as well as further clarifications as to when a page or site should get the Upsetting-Offensive flag, which was introduced with the last update to specifically target fake news as well as other sites publishing fake information.

Here’s the full breakdown of what changed.

This section is primarily for the raters themselves about how ratings are done.

This was removed from the beginning of the rater guidelines, but Google expanded this section and included it in the final section, which is detailed below.

This section primarily talks about overall page quality, and there was one significant change made for news sites with regards to YMYL.

Your Money or Your Life (YMYL) Pages

In the “News articles or public/official information pages important for having an informed citizenry”, Google added “Keep in mind that not all news articles are necessarily considered YMYL.”

To clarify, news sites that would somehow potentially impact the future happiness, health, or financial stability of users ARE still being held to YMYL.  If your news site does not fall under that, it would not.

This is an interesting addition.  Google has added an additional example of an inaccurate featured snippet. This shows they want their raters to be aware that featured snippets are not always right, and that raters need to consider that and rate them with Fails to Meet appropriately.

Here is the added example, which is a much more obvious featured snippet than the other example used in the guidelines:

They also make it clear that they want raters to rate based on the query being non-porn in intent.  Here they also changed their example keyword from bikini to breast.

For the examples in this section, they removed the “pictures of girls” example.

They removed a bit in here.  The italicized part was removed:

Not clear why specifically this was removed.

This is likely in response to the fact raters must now be employees of the companies doing the ratings, and not mere contractors, a change Google began requiring for the companies that are responsible for hiring those to do the ratings.

Google has brought some additional clarification to how raters should interpret if a result deserves the upsetting-offensive tag or not.  Google has added this section:

Important: Please think about the purpose of the page and how the content is presented when determining whether to assign the Upsetting-Offensive flag. There are many results around the web that focus on sensitive topics such as child abuse, violence, or racism; however, you should assign the Upsetting-Offensive flag based on the purpose, type, and/or presentation of the content on the page —not because the topic itself is sensitive or potentially upsetting.

For example, a result with content that encourages or graphically depicts child abuse should be flagged as Upsetting-Offensive . However, an accurate informational page about  child abuse (such as child abuse statistics, prevention, etc.) should not be flagged, even though child abuse itself is a sensitive topic that users may find upsetting.

This serves more of a reminder about how simply because a topic is a sensitive one, does not mean it automatically deserves the upsetting-offensive tag, but rather it should be based upon factors such as page purpose.  For example, even though reading statistics about child support is upsetting, it is still quality information and should not be flagged as upsetting-offensive.  On the other hand, a page on how to abuse a child would be considered upsetting-offensive.

This is very new to the quality rater guidelines and was brought up into response for queries like “Did the Holocaust happen” as well as the increase in fake news sites and articles.  But the clarification seems to imply that perhaps some raters were having trouble distinguishing if a result really should have the upsetting-offensive tag, or if some raters were flagging because the general topic was upsetting to them.

Remember that you should assign the Upsetting-Offensive flag to all upsetting/offensive results, even if they satisfy the user intent.

For example, someone could search for “prove the Holocaust is fake”, and even if the query was technically met with a page that IS upsetting-offensive, doesn’t mean it loses that designation simply because the query matched the result.  Remember, Google is trying to prevent these types of results from surfacing for various queries.

Curiously, Google has removed this screenshot from the guide.  This screenshot was one of the few we have that gives insight into the interface the raters use when it comes to rating search results and webpages. 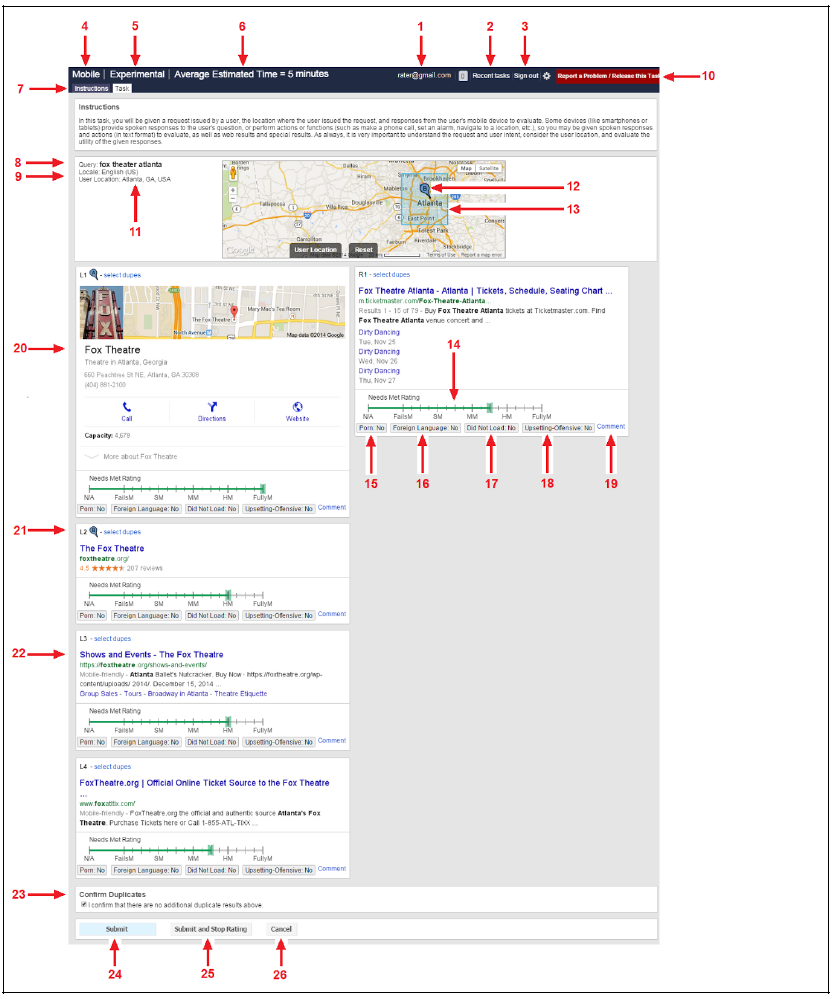 This section is specific to the raters doing the actual evaluations, but there is often some interesting information found within this section for SEOs and site owners.

The big change here is Google has increased the size of the screenshots showing the backend – they were so tiny before they were impossible to make out.

They also changed the wording which also includes a new reference to “contextual results”.

Some Needs Met rating tasks may not require ratings for all blocks. In these blocks, the Needs Met and EAT rating scales will be greyed out and annotated with the text “No Rating Required”.

The greyed-out results (sometimes referred to as “contextual results”) are shown to help you understand the query and inform your ratings. You can click on them when you feel like they will be helpful in determining your ratings.

It is not clear why Google felt the need to refer to these as contextual results however.

Understanding the User Location on the Task Page

Google has updating the wording with regards to the maps feature that sometimes sees a map included with some results, so searchers can evaluate if the query and results match the location.

While most query-based rating tasks have a user location listed below the query, a map will often be provided as well. This map can help clarify where the user was physically located when the query was issued in a more precise way.

This section was completely removed, but it served the actual raters from a technical point of view.

They included guidelines for raters about how the system determines duplicates, and removed some clarifying points:

● Results annotated by “ Dupe of… ” may be given different ratings/flags/comments.
● Results annotated by “ Same as… ” may not be given different ratings/flags/comments. Their Needs Met and EAT ratings, flags, and comments will be automatically transferred to each other.
● You cannot uncheck dupes that have been automatically detected and preidentified.

As noted above, this section was removed from the start of the guidelines. Google also added a new screenshot showing the reasons for released tasks.  Of note is the new “I did not sign up for adult content” addition. 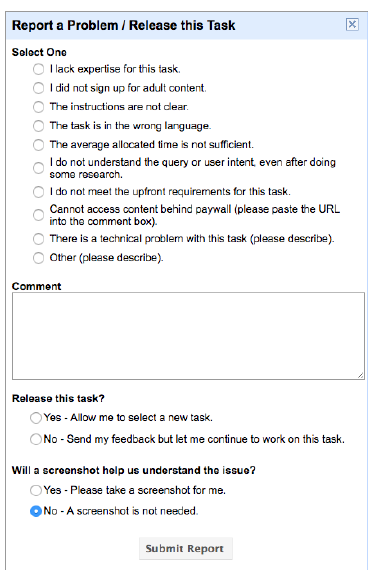 This update is not nearly as big as the last one published earlier this year, which saw significant changes made to fake news, science denial and clickbait.  This particular update seems to be more targeted to the raters workflow with some more detailed clarifications where there was previously some questions about the ratings.  If this is your first time reading the guidelines, my previous update has many more changes within it.

The full guidelines have been published by Google here.

Google has released a new version of the Google quality rater guidelines, a year after the last … END_OF_DOCUMENT_TOKEN_TO_BE_REPLACED