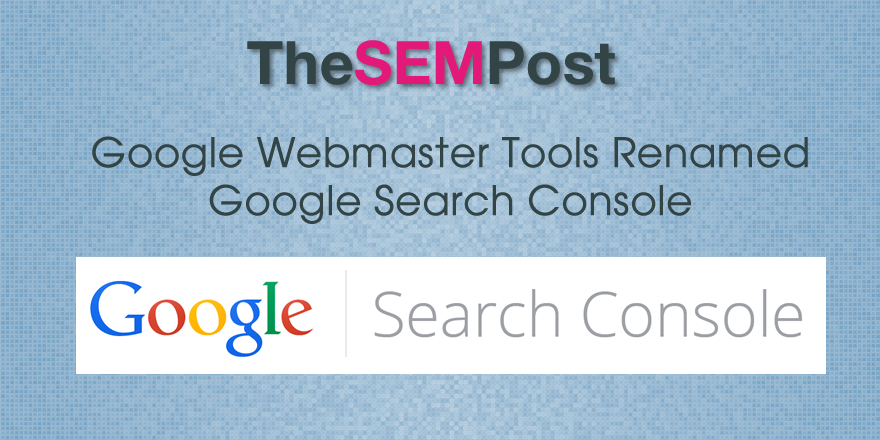 It turns out that the traditional idea of the “webmaster” reflects only some of you. We have all kinds of Webmaster Tools fans: hobbyists, small business owners, SEO experts, marketers, programmers, designers, app developers, and, of course, webmasters as well. What you all share is a desire to make your work available online, and to make it findable through Google Search. So, to make sure that our product includes everyone who cares about Search, we’ve decided to rebrand Google Webmaster Tools as Google Search Console.

We have seen the scope of Google Webmaster Tools evolve over the years and it has certainly expanded well beyond the role of merely helping webmasters, so making a name change does make a lot of sense and will appeal to many of those who might not have felt “webmaster” was their specific role.

Google has also expanded their offerings into many search-specific areas, such as with hreflang support and app indexing, along with their associated diagnostic tools and resources within Google Webmaster Tools.

Google first launched a portal with advice for webmasters back in 2001.  It was then revamped in 2006 as Google Webmaster Central, which is why you sometimes hear industry old timers still refer to it as that name.  This is also where the name “Webmaster Tools” began, as Google introduced diagnostic and usability tools to assist webmasters in “Statistics, diagnostics and management of Google’s crawling and indexing of your website, including Sitemap submission and reporting.”

The name slowly was referred to more and more as Google Webmaster Tools until it officially became the name.  But this is the first significant name change we have seen.

There has been a lot of expansion with the tools and help offered, most recently with the addition of Search Analytics, and the upcoming Search Analytics API. We have also seen it go through some changes as well outside of the tools it offers.  Members of the team have been more visible at conferences and the introduction of the Google Webmaster Office Hours Hangouts with John Mueller have been very popular, especially after Matt Cutts’ leave of absence meant the webmaster help videos stopped being created.

Google has released a new version of the Google quality rater guidelines, a year after the last … END_OF_DOCUMENT_TOKEN_TO_BE_REPLACED