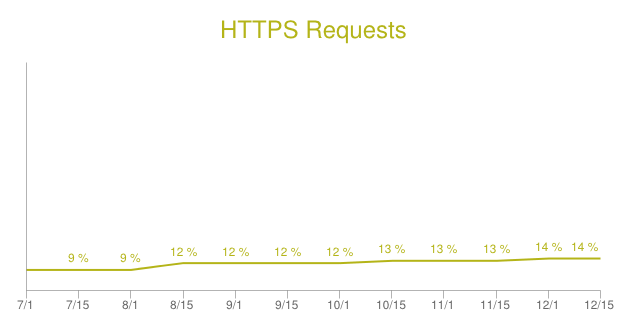 On August 1, 2014, The HTTP Archive found that 9% of webpages were over HTTPS.  On August 8, 2014, Google made their announcement that HTTPS would be used as a ranking signal.  When the data was run by The HTTP Archive on August 15, 2014, that number had jumped to 12%.  To put that into perspective, in the previous 9 months, that number only grew by a mere 1%.

Since the announcement, that number has continued to grow, although not with the same burst we initially saw immediately following Google’s announcement.  But it has gone up another 2%, with the mid-December numbers showing 14% of all webpages being requested being served over HTTPS.  So while there was that jump, it has continued to go up as more and more sites continue making the move to HTTPS.

The HTTP Archive gathers data from the top 1,000,000 websites, according to Alexa.  The sample size is not only very large but also covers a huge diversity in the types of sites used for analysis.

Google declaring HTTPS as a ranking signal seemed to do more for increasing the number of secured websites than anything else previously.  In 2010, when The HTTP Archive began tracking the data, only 2% of the top 1,000,000 websites were secure.

There was also an earlier spike in the number of sites switching to HTTPS in 2013, which coincides with the PRISM email surveillance program becoming known along with the controversy surrounding Wikileaks and the related Snowden leaks, when more people were becoming aware and concerned about repercussions of unsecured websites. 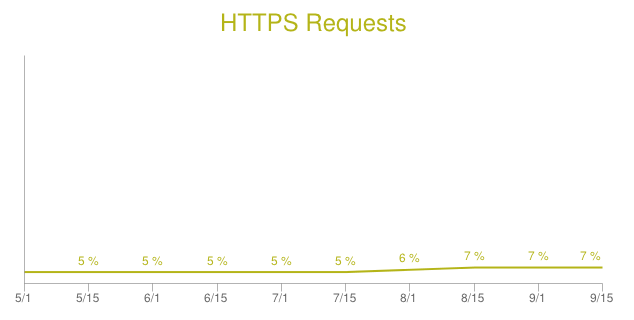 It will be interesting to see if there is an event in the future – like the idea Google Chrome is considering where they will warn users of any site they try to visit that is unsecure – will see another jump like the one with the original HTTPS as a ranking boost announcement.

Google has released a new version of the Google quality rater guidelines, a year after the last … END_OF_DOCUMENT_TOKEN_TO_BE_REPLACED