You are here: Home / Google / Google’s Mobile Ranking Algo is Continuous & Algo Might Change Over Time 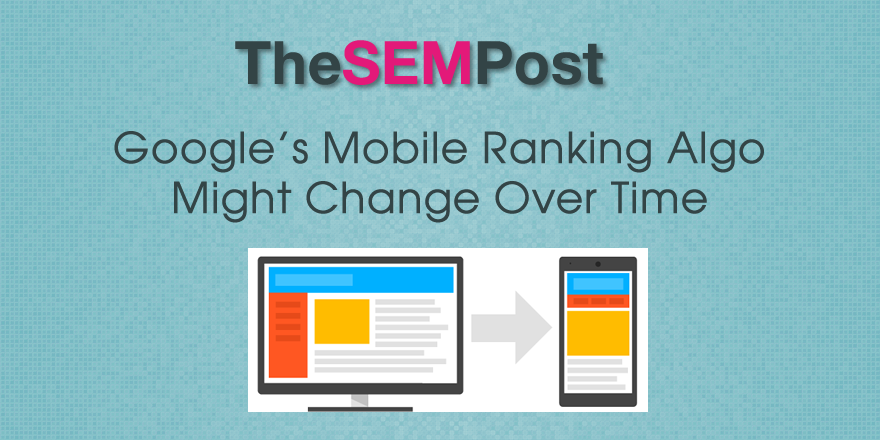 When the initial mobile ranking algo starts being applied to mobile searches on April 21st, it is essentially a “is it mobile-friendly or not” signal when determining the mobile search results.  But Google has confirmed that this algo will very likely continue to change.

We’re always looking to improve our ranking, so this algorithm might change over time. If we focus on different areas of mobile usability in the future, we’d likely incorporate them into the Mobile-Friendly Test and mobile usability report so check there to see what we’re currently detecting on your site. You can also stay tuned to us right here by following us on Google+ for future updates.

Google has also said that the algo will be running continuously, so if we do see additional signals added, it is something that we would see reflected in the results immediately.  But would we know about signals before they happen for the mobile algo?  I suspect some of them would be pretty obvious and easy to reverse engineer, even if Google didn’t announce that the algo was being updated or state what was included in the changes, ahead of time.

The continuous updating is also nice for webmasters who are used to the pain of waiting months for algo updates, such as with Penguin and Panda.  An on-the-fly application of this algo is a much nicer deal.

Gary Illyes has already hinted about some of the potential changes that are coming in the future, including an impact to mobile interstitials, commonly used to promote app downloads as well as a change to pagespeed being included.

@jenstar I don't have a public safe comment for those. Yet 😉

I think it is good that this will continue to evolve, but it was probably smart not to bog it down with too many parts to the mobile algo while many people were primarily working on simply getting their sites mobile friendly before the April 21st change.  And there are plenty of things I would personally love to see included (not just app insterstitials but also sites running ad networks that auto redirect to app stores!), primarily because some of the things mobile websites do can really hurt user experience, even if they are “mobile-friendly” per se.

How long will it be before we see an update?  If it is something minor such as an app interstitial, it could be relatively soon, especially since it is something that a website can easily change.

However, a page speed signal would definitely fall into one of the more complex changes a webmaster would have to do, unless it was something as easy to fix as optimizing images, which Google has said is the most common site speed issue they see.  And since Google has quietly released a tool to optimize page speed, I would say that it is an area webmasters should look at, once they finish transitioning to mobile.

So webmasters should be prepared for signal changes in the mobile algo, and be prepared to adapt to them quickly with Google using a continuous update application of the algo.

Google has released a new version of the Google quality rater guidelines, a year after the last … END_OF_DOCUMENT_TOKEN_TO_BE_REPLACED