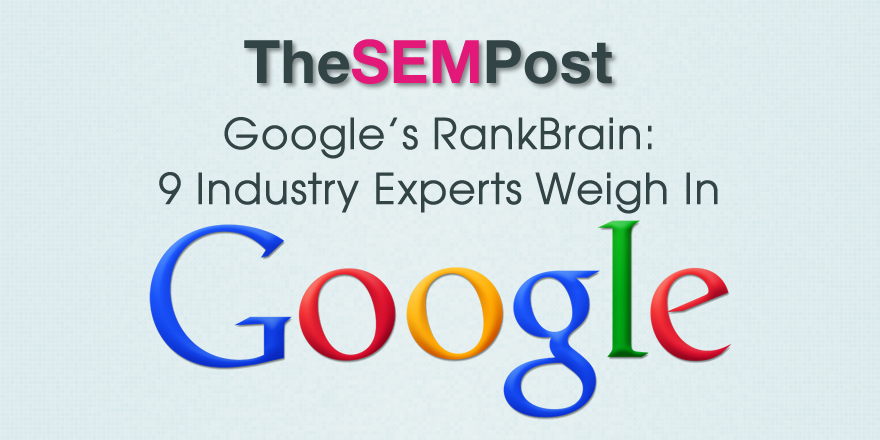 Google’s new artificial intelligence algo, RankBrain is definitely interesting (all the details about RankBrain can be found here).  We have reached out to 9 industry experts to get their reactions about RankBrain and what it means.  Here is what they had to say.

There’s been a lot of talk in the SEO industry over the past 12-24 months about algorithms that could potentially learn and how those algorithms could impact the search results. Well, with yesterday’s article about RankBrain, we got our first glimpse of how Google’s AI algorithms could tangibly impact the SERPs.

For now, it seems that RankBrain is helping Google handle the 15% of queries per day that have never been seen before. That’s important, but it’s just the beginning. Search algorithms that can potentially learn on their own can help Google in many ways. The idea of self-learning algos is both amazing and scary to think about (on multiple levels).

The journalist who interviewed Google and wrote the article, Jack Clark, explained to me on Twitter that RankBrain cannot learn on its own yet. It needs to be retrained by engineers at the moment. But what happens when algorithms are unleashed on the web that can learn on the fly based on the billions of queries being performed each day globally?

@methode @glenngabe yeah. It's periodically re-trained, but it's not learning on-the-fly.

For example, what if quality and webspam algorithms are continually learning new tactics being used to game the system? Think about new Panda and Penguin algorithms that are constantly being fed new information, continually analyzing user engagement, and finding new exploits. They might understand aggressive advertising and how certain situations frustrate users (across devices). And much, much more.

When that happens, not even Google’s engineers will fully understand how each algorithm works. I asked Google’s Gary Illyes that specific question yesterday via Twitter and he explained that’s not how RankBrain is working yet. But let’s face it, we know that RankBrain (and other AI algorithms) will be able to work like that in the future.

@glenngabe it's not. The team was working on it for months and its effects are expectable, not assumable.

The SEO community (including myself) has been complaining about extended rollouts and crossing algorithms, but we should be careful what we wish for. When we have real-time, crossing algorithms that can also learn on the fly, we might just want those extended rollouts back. And unlike in the movies, we won’t have Arnold Schwarzenegger to save us. Wait, I’m going to reach out to him today. I’ll let you know how it goes. 🙂

The English language has over 1M words and Googles technology was built upon the English language. The semantic meaning and interpretation of words evaluated via Google’s big data sets, can be done in English because of the amount of users inquiries (amount of data), behavior patterns, etc allow for Google to figure it out.

However, I am stumped on how it would figure out the proper interpretation of German grammar, or romance languages in sparsely populated countries. Will Google know when someone in France uses a “Fridgedaire” instead of the proper word for refrigerator?  Or recognize that 50 different arabic dialects call “camel” a different word.

There are so many factors when it comes to multilingual yet when does it roll out in those countries and who is monitoring the AI to make sure it doesn’t give strange results?

I’ve suspected for some time now that the Panda algorithm is shifting from being heavily technically focused to now being more and more based on overall user happiness with a site. In the past, clearing out thin content could often cause a Panda recovery. But now more and more we need to clear out thin content AND make the site incredible for users in order to move the needle.

Many have argued that this couldn’t be happening because Google doesn’t use Google Analytics data. But, if machine learning is increasingly deciding which sites users are preferring, then it makes sense to me that Google would use this kind of data in Panda calculations.

It’s always been important to have a technically sound site but I believe that RankBrain is allowing Google to learn which sites are truly the most satisfying for users.

The fact that we didn’t know that RankBrain existed until told negates any instinctive issues we might have with AI or computer interpretation of intent. Quite honestly I was a bit surprised to find out it was only within the last few months that RankBrain was impacting results and from both a user standpoint and SEO standpoint it has a lot of advantages.

When I think of whether a computer or Donald Trump is going to be better at formulating a result that matches my intent I immediately realize the benefited of a unbiased AI determining what ranks.  When I further think of things from an SEO standpoint and consider the shock-and-awe of human-driven Google updates vs the everflux updates inherent in a computer-generated algorithm and their predictability I’d certainly prefer the algorithm-driven version.

All-in-all I’m not surprised at the announcement.  It makes perfect sense in the evolution of what Google is and does and I’m just glad to know they’re testing it on the relatively small scale they are.  What will be truly interesting will be watching them tweak it for their full algorithm.

Rankbrain appears to be more of a shift in the way queries are processed much like Hummingbird was. While Hummingbird was a huge step forward in Google better understanding user intent, RankBrain is taking it to another level by using AI by way of machine learning.

As a result of that I would expect that Google’s ability to understand user intent will continue to dramatically improve and we are likely to see more queries being answered by features such as the answer box and perhaps right within the search box itself.

RankBrain is an effort to produce better query sets for Google’s Entity Search.

Entity search does not do well with “things” it does not recognize or cannot associate well. The RankBrain algorithim appears to have been created to help bring back a list of probable results when known definitions and/or entity relationships cannot be easily determined. Therein lies the issue, however.

Probable results are not well suited to user intent. A kitchen sink approach means that generally speaking some results will fit mostly, some not at all and some will be in between. However, small to none will be exactly what you wanted.

In addition, since the move to entity search Google has lost over 2+% of its market share. This may not seem like a lot, but if you are going to overhaul an engine and your return is diminished marketshare you might have to start reviewing your choices. RankBrain appears to be that effort to make Entity Search better, but it is not a fix.

My thought is and I know this is likely to be controversial, but Google will need to separate its “Answer Engine” from its “Search Engine” if it does not want to see further declines. The engine cannot be both and entity search is limited.

I believe this is an outgrowth of Hummingbird, as stated in the official announcement that they were moving away from strings (of text) directly to (understanding) things.  One of the people credited with RankBrain is Thomas Strohmann, who’s associated with the KnowledgeVault, deep learning.  This isn’t KnowledgeVault though.

RankBrain sounds like Query Reformulation which is about defining vague search queries.  There are various methodologies to doing this, some rely on training the machine via click logs.

Another method relies on examining a phrase and then “remembering” previous similar searches, like neighbors, ranked according to closeness.  This I believe are the “vectors’ that they are discussing. Then making a guess at what the user really means.

Here’s a somewhat related document where it discusses using click log data to train machines to “relate queries” rather than make judgments about whether queries are relevant.

Our goal is not to elicit relevance judgments from user clicks, but rather to relate queries by pivoting on commonly clicked search results. The hypothesis is that two queries are related if they lead to user clicks on the same documents for a large amount of documents.

I think that for pure play sustainable SEO, nothing changes with AI involved. There will likely be more wasted energy for this in the industry as some people try to find ways to game it. And more wasted energy by some who will claim they think they see when that is or isn’t having an impact in some niche.

What continues to matter though is the need for most sites to fix the mess they have had for too long, which was a result of all the past insanity invested in shiny objects.

Bill Slawski, SEO by the Sea

RankBrain appears to be another query rewriting approach from Google; an alternative to how they had been rewriting queries before.

We finally have the first Google Quality Rater Guidelines update of 2022, and like usual, it is … END_OF_DOCUMENT_TOKEN_TO_BE_REPLACED